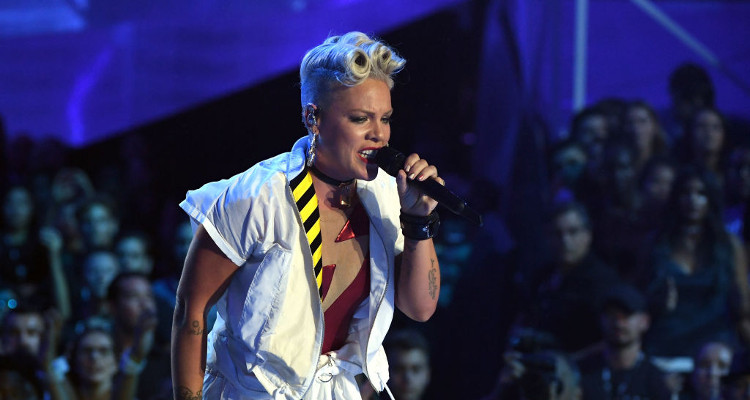 With a bunch successful albums and a successful career, there’s one question on people’s minds: How rich is Pink? Well, according to sources, Pink’s net worth in 2018 is estimated at $175.0 million. Let’s take a look into her secret vault and find out how she made all that money.

Born on September 8, 1979, Alecia Beth Moore, professionally known as Pink, is a singer, dancer, songwriter and actress. She started her career in 1995 with the R&B girl group, Choice. In 2000, she rose as a solo artist and released her debut album, Can’t Take Me Home. In the United States, it was a certified double-platinum and created two Billboard Hot 100 Top 10 hits: “Most Girls” and “There You Go.”

Fame continued to knock on her door and she became even more popular with the collaboration hit, “Lady Marmalade.” It was the No. 1 single on the Billboard Hot 100 and also gave Pink her very first Grammy Award. In 2001, Pink’s album, Missundaztood, sold over 12 million copies worldwide.

In 2003, her album Try This earned her the Grammy for Best Female Rock Vocal Performance.

In 2010, she released her compilation album, Greatest Hits… So Far!!. From this album, Pink’s songs “F****n’ Perfect” and “Raise Your Glass” became exceedingly popular.

Having sold over 50 million albums and 95 million singles worldwide throughout the course of her career, Pink isn’t just famous, she’s also way richer than most of her peers in the industry.

Fans have been making wild guesses as to how rich Pink is, and we’ve done a bit of research to get you a detailed account of Pink’s net worth.

The next year, she was sixth on Forbes‘ Top-Earning Women in Music list with earnings of $22,0 million and an average of a whopping $1.0 million per show on the road.

With earnings of over $32.0 million, she was on Forbes‘ list of Highest Paid Musicians in 2013. We wonder what being that rich feels like. *Sigh*

In 2013 and 2014, Pink was the highest earning touring female artist. Her The Truth About Love world tour grossed more than $183.0 million.

Numbers aside, Pink’s concerts have rendered jaw-dropping performances that not only keep fans coming back for more, but also justify her gigantic earnings.

Most recently, Pink’s Beautiful Trauma tour, which commenced in March of this year and will be ongoing until sometime in 2019, has already earned the pop sensation well over $100.0 million in ticket sales alone.

Since the tour is far from over and Pink intends to extend it until the middle of next year, as long as her health prevails, Billboard has estimated that the gross earnings of this tour could potentially surpass the $275.0 million mark.

Unfortunately, Pink had to postpone her August 3 performance in Sydney, Australia under strict doctor’s order due to an upper respiratory tract infection.

Naturally, fans were extremely disappointed by this news, especially in light of the fact that around the same time, she was spotted by paparazzi with her 7-year-old daughter at Byron Bay in New South Wales, Australia. This brief beach trip to spend some quality time with her child brought on a world of hurt for Pink from upset fans.

On August 1, the Raise Your Glass singer tweeted the following announcement regarding her illness and the postponed tour date:

“Hi my Sydney friends. It is with great frustration that I bring you this news:( Friday’s show will be postponed. I was hoping a couple of days of rest would help me kick this sick, but not at the speed I was hoping for. I appreciate your well wishes and understanding + I’m sorry.”

Despite dealing with this major health issue and suffering a setback, the tour has otherwise continued without a hitch and is well on the financial trajectory predicted by Billboard back in June of this year.

can't wait to perform at @KAABOO— especially because @UNICEFUSA will earn 20% of all net sales made with the link in my profile! Hope to see you there! @kevinmazur @gettyentertainment

It’s estimated that Pink makes approximately $52.0 million annually from her collective album, singles, and concert ticket sales. Hearing this may have some fans wondering how she spends her earnings.

One of Pink’s biggest assets was her and her husband Carey Hart’s home in Malibu, which was sold for $12.5 million in 2016.

Built on more than an acre of land, the six-bedroom house is surrounded by the breathtaking Pacific Ocean along the southern coast of California.

Its tastefully designed interior was decorated with some elegant pieces of art, one of them being a painting of Marilyn Monroe valued at $10, 000. We’re sure the stunningly beautiful house and its enviable view were nothing short of paradise for Pink and her family.

For international performances, Pink earns between $3.0 and $4.5 million. Her U.S. performance earnings range between $1.0 and $1.5 million. With that said, Pink pretty much earns more money from a single performance than most people can ever hope to make in their entire lifetimes!

Considering the fact that Pink is an international pop sensation, not to mention the fact that her husband is a famed motocross racer, it only makes sense that she’d have a slew of fancy vehicles in her garage.

Pink’s collection of high-end vehicles includes her precious BMW X6 (the base model is valued at approximately $63,000 and that’s without all the bells and whistles), a classic 1959 Chevrolet Impala convertible, a Triumph Bonneville T100 motorcycle, and a Harley Davidson Sportster XL Iron 883N super-bike.

Pink’s husband, Carey Hart, is a professional motocross racer. Their love story is indeed a remarkable one. She met him in 2001 at the X Games in Philadelphia. In 2003, they briefly separated only to get back together with even more love for each other. In 2005, Pink proposed to Hart in the most adorable way ever!

During a Mammoth Lakes motocross race, she wrote “Will you marry me?” on a pit board, later adding an “I’m serious” for him to notice it. When he did, Hart veered off the track to accept her proposal.

The couple said their vows in Costa Rica on January 7, 2006. In June 2011, Pink gave birth to their daughter. In December 2016, the couple welcomed a son. Born to super successful and talented parents, Pink’s kids are truly lucky.

Also Read: Jaden Smith’s Net Worth 2017: How Rich is Will Smith’s Son?

Through her music, which mostly portrays strong messages about female empowerment with songs like “Stupid Girls” and “U + Ur Hand,”

Pink has been an immense inspiration to countless fans around the globe. Her Twitter feed is proof of that as it’s littered with emotional and grateful messages from fans who’ve recently attended her concerts.

What makes these tweets even more special and heartwarming is that Pink actually takes the time to respond to her fans and let them know that she’s truly appreciative of their support.

Evidently, Pink’s career will continue to grow and reach new heights as she elegantly and successfully conquers every challenge along the way.

What makes her truly unforgettable in the eyes of her fans is her undying love for her family, friends, and supporters. This is a woman who is relentlessly climbing up the ladder of success without allowing it to compromise her personal life. Pink is the embodiment of female strength and stamina in a mostly male-dominated industry.

As she says, “It’s about being alive and feisty and not sitting down and shutting up even though people would like you to.”