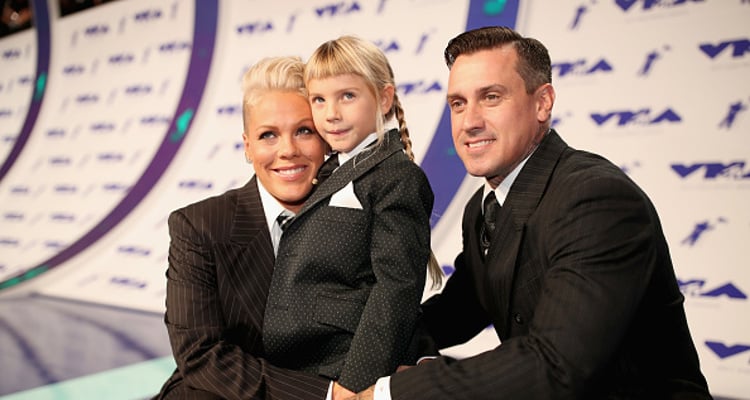 Pink’s husband, Carey Hart, and daughter, Willow, looked adorable on the VMA red carpet. The trio wore matching 3-piece suits and posed together all night. If you’re wondering what Carey Hart’s net worth is, you might be shocked to know it’s a whopping $20.0 million! Find out all about Carey Hart’s wiki and Pink’s family, right here.

Pink gave birth to her second child, Jameson Moon Hart, seven months ago, and is already slaying it again on red carpets. Her husband, Carey Hart, and daughter, Willow cheered her when MTV decided to honor Pink with the prestigious Michael Jackson Vanguard Award. We all know everything there is to know about Pink, but who is Carey Hart? For those who want to know more about Pink’s husband, we’ve got the Carey Hart wiki you have been looking for.

He Grew Up in Sin City

Carey Hart was born on July 17, 1975, in California and was raised in Las Vegas, making him 42 years old. His father was a construction company owner named Tom Hart, who separated from his wife when Carey was little. Tom raised Carey and his brother Anthony. Carey Hart was interested in motocross since he was four years old and his father gave him a motorcycle. In 1981, Carey was already competing in AMA, and he became a professional racer at 18.

At the “Hart” of Motocross

A couple years before his professional career began, Carey Hart sustained injuries from a freak accident with a tractor. He broke both femurs and fractured his wrists. But he soon recovered, and before anyone knew it, he was competing in freestyle motocross across the country. In 1999, he performed the BMX “Superman seat grab” trick and became the first rider to publicly perform the stunt successfully. He did the “inverted Superman” (now called the “heart-attack”) at the Gravity Games that same year, which fans also saw for the first time.

Hart won two major awards that year: A bronze medal at the Summer Gravity Games, and a gold medal at the Australian X Games.

Carey Hart met superstar Pink at the 2001 X Games in Philadelphia. They had an instant connection and the couple dated for four years after that. And, of course, they got hitched in the most rad way possible! Pink decided to propose to Hart during one of his races, with a board that read, “Will you marry me?” Hart ignored it at first and continued to focus on his rounds, until Pink added an “I’m serious” to the board. Hart saw it and pulled out of the race to accept her proposal! They got married in 2006, at the Four Seasons Resort in Costa Rica.

But there was trouble in paradise following their marriage, and they decided to separate two years later. Another tragedy struck Hart when his brother Tony died from injuries sustained in a motocross competition. Pink stood by his side during the grief and, in 2009, Hart announced that he and Pink were back together. Pink revealed that they went to marriage counseling and never divorced, so they were finally a unit again. They welcomed their first child, Willow, in 2011. The pictures of their first baby were published by People, and in December 2016, they welcomed their second child, Jameson.

Carey Hart has been racing motocross since his childhood, and has won multiple awards and accolades for his skills on the track. He was even featured in Inked for his tattoos! He has a tattoo shop called Hart & Huntington Tattoo Company, which he opened with his friend in Vegas. The duo also launched a clothing brand of the same name, adding to Carey Hart’s net worth which is an estimated $20.0 million. He was spotted in various promos for Mountain Dew, Fox, Ford, and Dunkin’ Donuts. Apart from all this, he was also featured in Pink’s music videos for songs like “So What” and “Just Give Me a Reason.” As far as money goes, Carey Hart and Pink are set to live a very luxurious lifestyle!