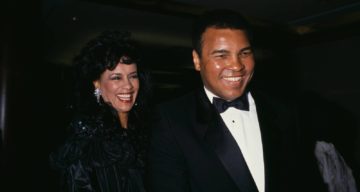 Sonji Roi was Ali’s first wife and she was a singer, model, and waitress who married Ali when he still went by the name of Cassius Clay. Ali proposed the same night he met Roi in 1964 and they divorced in 1966. Roi was not happy with the restrictions that were set for women by the Nation of Islam, which contributed to their divorce. Roi was found dead in her apartment in 2005 of a heart attack.

Khalilah Camacho-Ali, who was born with the name Belinda Boyd, was Ali’s second wife. They were married in 1967 and divorced after 10 years of marriage. Like Ali, she converted to the Nation of Islam and they had four children together: daughter Maryum, twins Jamillah and Rasheda, and son Muhammad Ali Jr. She’s also a ninth degree black belt in karate and studied under Jim Kelly.

Veronica Porsche was an actress and model who had an affair with Ali in 1975. By 1977, his marriage to Camacho-Ali was over, and he married Porsche in that same year and she was pregnant with a baby girl, Hana. They are also the parents of retired boxer, Laila Ali, who was born in 1977. Porsche and Ali divorced in 1986.

Yolanda Williams and Ali had been friends since 1964 back in Ali’s hometown of Louisville, Kentucky, and they were married in 1986. They have a son together, Asaad Amin, whom they adopted when he was five months old. However, the couple divorced shortly after.

Despite his many marriages, Ali loved his family and left a legacy that many could look up to. Though he was controversial at times, he believed in living a meaningful life and fought for what he believed in despite what others thought of him. It was no secret that Ali had a long-lasting battle with Parkinson’s disease, and passed away after having respiratory issues.

Many of Ali’s children have expressed their thoughts about the loss of their father to the media and their late father’s fan base.

“The Greatest Man that ever lived. Daddy my best friend & my Hero You R no longer suffering & now in a better place [sic],” Rasheda tweeted alongside a photo of her and her dad.

Ali’s daughter Hana also addressed the public via Instagram, sharing her kind words on his deathbed.

“Our hearts are literally hurting,” she wrote. “But we are so happy Daddy is free now. We all tried to stay strong and whispered in his ear, ‘You can go now. We will be okay … you can go back to God now.’ All of us were around him, hugging and kissing him and holding his hands, chanting the Islamic prayer.”