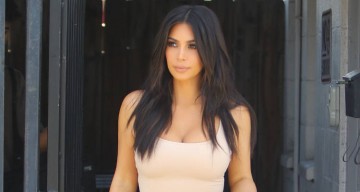 A few days ago, Fergie released her latest music video for “M.I.L.F. $” which included several celebrity “hot mamas” including Kim Kardashian. She looks perfectly toned and fit in the video. In fact, her waist looks so small in he music video that fans took to Twitter to express their opinions about Kim’s waist in the video. Some even claimed it to be the work of photoshop!

However, Kim Kardashian has proof her waist in “M.I.L.F. $” video is real. She gave birth to her son Saint West on December 5 2015, and achieved the slimmer waistline with the help of her strict diet, her intense gym routine, and her beloved corset.

A photo posted by KimKanyeKimYe (@kimkanyekimyeofficial) on Jul 5, 2016 at 4:50pm PDT

The mommy of two has been working incredibly hard to get her figure back and the “M.I.L.F $ music video was the perfect way to shut down comments from haters who claim she used photoshop in the video. The fact that Kim has proved that her waist in the “M.I.L.F $” video is real has definitely helped shut down a lot of negative comments. You go, girl!