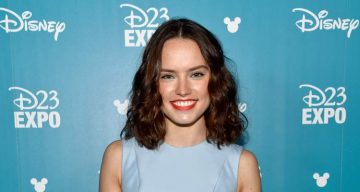 Happy Star Wars Day and May the 4th be with you! Star Wars Day celebrations are underway, but if you want to see how the films’ stars are acknowledging the day, look no further than Daisy Ridley’s Instagram, where the latest heroine of the franchise has posted several Star Wars Day images.

For Star Wars Day 2016—the first after the release of The Force Awakens—star Daisy Ridley posted three photos from her time on set while filming the incredibly successful film. The photos, which include her personal team and costar John Boyega, can be seen below.

Each picture was prefaced with the line, “HAPPY STAR WARS DAY Y’ALL! [sic]” showing that Daisy Ridley is just as excited to be a part of the Star Wars mythos as the fans are to watch it. Expect even more great pics and more fans to love them on Star Wars Day next year! May the 4th be with you!