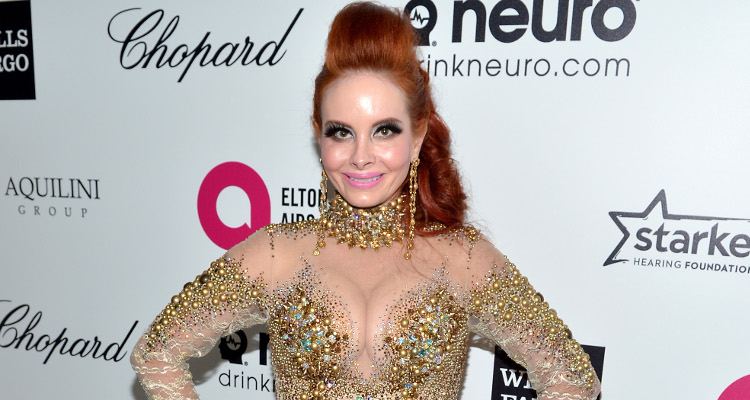 Phoebe Price is famous for wanting to be famous. In fact, tabloids and paparazzi typically describe her as a “wannabe actor.” She is a D-Lister who never really broke into the Hollywood scene. She often seeks out photographers, who almost always catch her bending over, baring her goods, or experiencing random “wardrobe malfunctions.”  If you are wondering who Phoebe Price is, then take a look at our Phoebe Price wiki.

Does the name Phoebe Price ring a bell? Probably not! To be honest, nobody really knows who Phoebe Price is or what she is even famous for. What we do know is that this is one woman who tries her hardest to get noticed. In fact, Price herself does not know why she is famous, but she is not complaining!

The most important thing to her is popularity and exposure. Price is photographed a lot by the paparazzi (usually on purpose) and she sure makes it worth their time by posing eccentrically and dressing up for mundane tasks like walking her dog or buying a magazine. Price recently appeared on the reality TV series, Botched with actress and friend, Angelique Morgan, a.k.a. Frenchy. She appeared on the show to fix her nose and, needless to say, her consultation was a little funny. If you have no clue about who Phoebe Price is, then keep reading.

Born in Alabama on September 27, 1972, Phoebe Price’s age is 44. She went to Walker High School in Jasper, Alabama. At a very young age, Price was drawn to acting and modeling. At the young age of 19, she purchased her first corporation in entertainment and fashion. She later explored the world of acting and saw minor success as an international actress and model in Capetown, South Africa; Athens, Greece; and Milan, Italy.

Price moved to Los Angeles to further pursue her acting career and is said to have taken up acting classes with the best coaches. Besides acting, Price spends her time working with charities and is a spokeswoman for a battered women’s charity. Additionally, she designs hats and headbands found in some leading boutiques in California and Beverly Hills.

Price appeared in an episode of The X-Files as an extra named Marie, according to The Huffington Post. She has appeared in a couple of low-budget films such as A Motor Lodge Rub, The Victim, In My Sleep, Stanley DeBrock, Get Smart, and The Junkyard Willie Movie: Lost in Transit. Even now, Price only had minor roles in relatively unknown films, but she is trying extremely hard to make a name for herself as an actress.

For those who might not know, Botched is a reality television show that follows two doctors, Paul Nassif and Terry Dubrow, as they take on cases of plastic surgeries gone wrong. The show premiered June 24, 2014 on E! and is currently in its fourth season, which premiered on June 24, 2017. On the latest episode of Botched, which aired August 3, 2017, Price was on the show with her friend and former patient, Frenchy. While discussing Price’s case, the doctors said that she has a nostril retraction from an aggressive nose job. During her consultation, Price told the doctors that she has a dent in her nose and explained that she has paparazzi following her around, so haters comment that one of her nostrils is bigger than the other. Price also added that she feels things are poking out of her face. Dr. Nassif said that since she is an actress, she might be a little dramatic.

Tune into E! Thursday nights at 9:00 p.m. EST for the latest episodes of Botched. For now, check out a clip of Phoebe Price’s Botched debut below: