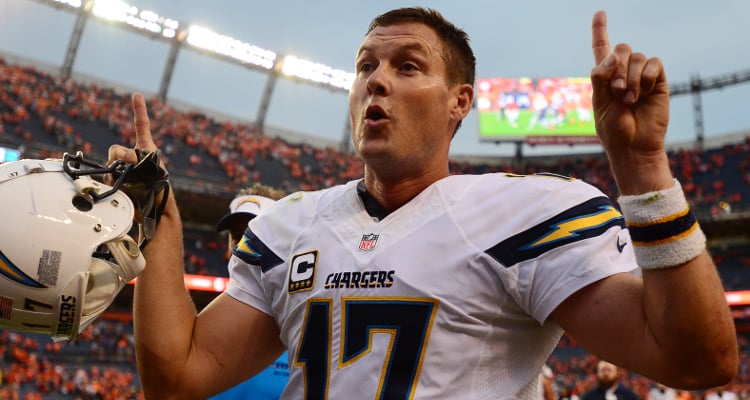 Philip Rivers and wife Tiffany Rivers have announced that they are expecting their ninth child. The couple has been practising a “no-contraceptive” relationship and credit their growing family to the religion they follow!  Their last child was a baby girl, Clare, who was born in October 2015. Find out more about Tiffany Rivers, and Philip Rivers’ family below.

Tiffany Rivers and Philip Rivers are high school sweethearts who’re constantly giving everyone couple goals! The Rivers family is a team in itself with six girls and two boys, and now another baby on the way. The couple is more than happy with their large family, and would love to have more! Read on to know five facts about Philip Rivers’ wife and family in our Tiffany Rivers wiki.

Tiffany and Philip went to junior high school together in 1994, which is when he began playing football. It looks like ‘94 was their lucky year because it was around this time that the couple started dating.

They were together for five years, and while his football career took off to a great start as a freshman in college, Philip asked his coach if he would be okay with the player getting married.

Philip Rivers proposed to Tiffany while they were both still freshmen in college. They married on May 19, 2001, and have happily been together since. The couple believes in a marriage that holds all the right values, and for them, family comes first. That is probably why they love spending time with each other and their kids!

Tiffany and Philip Rivers saved themselves for marriage. Philip has been a devout Catholic throughout his life, and Tiffany converted before getting married. In an interview, Philip said that though they married young, they are happy being with and loving each other. They feel blessed to have their children in their lives.

Philip also said that they practice the teachings of the religion they follow, which is partly how they have such a big family. “It started as obedience, but what a blessing it has been for our family,” Philip said when talking about Natural Family-Planning.

Tiffany Rivers Has 8 Children with Philip Rivers, With One More On The Way

Philip and Tiffany’s first child, Halle, was born on July 6, 2002, just a year after her parents tied the knot. Their family kept growing, and are going strong with two boys, Gunner and Peter, and five more girls, Rebecca, Sarah Catherine, Caroline, Grace, and Clare. Philip considers his kids to be lucky charms and, along with the #17 jersey he wears to honor his father, he gives them credit for his wins.

According to ESPN‘s Eric Williams, NBC Sports was the first to report the news of Rivers’ ninth child.

Philip Rivers’ SUV is Dubbed As The “Rivers Mobile”

While most players pick up and move, a true San Diegan, Rivers chose to stay put in his home with his family, and commute to Los Angeles. What seems like a dreadful ride for most people, on the Interstate 5, for Rivers, the hour-and-a-half drive could not have been sweeter!

The 14-year Los Angeles Chargers player has made sure he takes a piece of his home everywhere he goes, by splurging on a modified Cadillac Escalade, that has the power to make anyone feel like a king!

The San Diego Union-Tribune, reported on the features of the Rivers Mobile, and it looks fantastic inside. Not only does the 6-foot-5-inch-tall star gets to recline in a comfy seat, he can do so while watching games and programs on his 40-inch satellite TV!

The car comes complete with a mini refrigerator and WiFi. The newspaper also reported that the cost of the car was anything north of $200,000 without driver’s salary.

“My two biggest things were my family time and my preparation and what I owe this football team,” Rivers said, adding “I was not going to sacrifice either of them in any big proportion. I can look at all the pluses and minuses and say, ‘OK. This does it.’ This allows me to get home in the 6 to 7 hour, which is when I got home the last 11 years, and it allows me to watch all or more of the film I watched before.”

Taking Time out for Each Other

With a bunch of kids and a glamorous career, the Rivers are managing a pretty tight shift in their household.

They hardly get time to themselves and spend a romantic evening together, but when they do, they make sure it’s worth it! When asked about this in an interview Philip said, “On the rare occasion my wife and I will get some time to ourselves and leave the kids with a babysitter, we’ll go to the movies or head to dinner.

We’re really simple people. Both of us are homebodies, so we like home dates. When the kids are all tucked in we’ll watch a game that’s recorded or just sit and chat. She’s so busy all day with the family and I’m busy here with the team that it’s nice to get that time to talk and catch up on each others day.”

With this new baby, they are probably going to have lesser time, but what’s a better teacher than the past? We’re sure the mommy-daddy team are as calm as one can be for this ninth child. Congratulations to the happy parents!