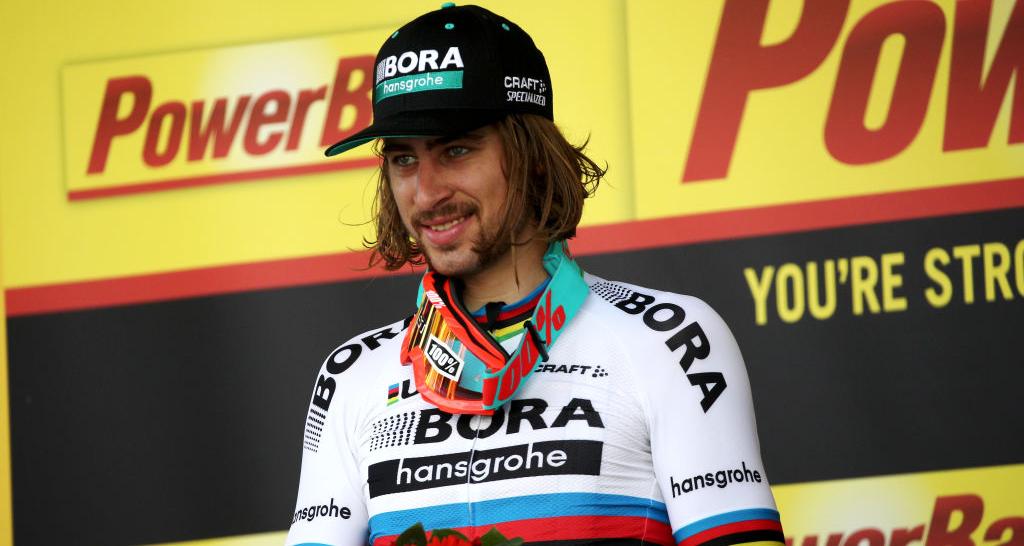 People are upset and shocked at the news of cycling great Peter Sagan’s impending divorce from his wife, Katarina Smolkova. Sagan himself announced this news in a Facebook post on July 18, 2018. He explained that it was a mutual decision and their top priority was creating a loving and caring environment for their baby son, Marlon, who is just a few months old.

There is some sad news from the Peter Sagan camp regarding his personal life that is sure to upset his numerous fans.

On July 18, 2018, Sagan announced that he was splitting from his wife, Katarina Smolkova, after being married to her for almost two and a half years.

This news has caught many people by surprise as it seemed like it was only yesterday that the two had gotten married.

Peter Sagan Is One of Cycling’s All-Time Greats

Unfortunately, the news is true. Peter Sagan and his wife, Katarina Smolkova, are splitting up.

Those who don’t follow the sport might still be wondering who Peter Sagan is. He is a Slovak professional road bicycle racer for UCI WorldTeam Bora-Hansgrohe and is considered as one of cycling’s most exceptional talents. He’s won numerous titles in the last decade.

They Have a Baby Boy Named Marlon

Sagan is often called by his nicknames such as “Peto,” “Peter The Great,” “Three-Pete,” and “Tourminator.”

He got married to Smolkova on November 11, 2015, in Slovakia, and now lives in Monaco, a sovereign city-state on the French Riviera in Western Europe. They are parents to a son named Marlon, who was born on October 25, 2017.

On July 18, 2018, Sagan took to his Facebook account to explain the decision to separate from his wife. He mentioned that it was a mutual decision made by him and Smolkova together.
According to Peter Sagan’s Facebook post, he said the two would be better off if they separated as a couple and would remain good friends in the future. 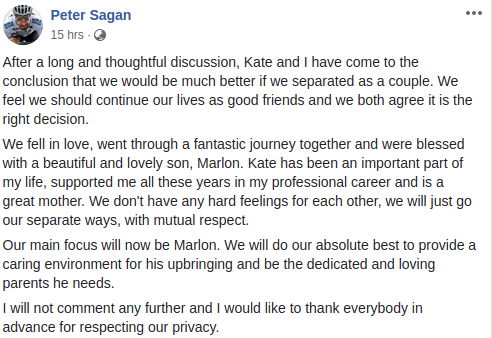 He added that Smolkova had been a pillar of support all these years in his professional career and a great mother to their son, Marlon. He stressed that they had no hard feelings toward each other and intended to go their separate ways.

Sagan said that he and Smolkova had decided that the most important person in their lives was their son, Marlon. He vowed that both of them would make every effort to provide him with a caring and loving environment required for his upbringing.

The cyclist kept his post short and thanked everybody in advance for respecting his and Smolkova’s privacy.

The Dream Is Over

The Katarina Smolkova-Peter Sagan divorce news has struck a chord with many who were rooting for the couple, especially after recently having Marlon. Some are more concerned with how Peter Sagan’s split from his wife will affect his skills on the track.

Hopefully, it doesn’t affect his championship-winning ways fans have now come to expect!