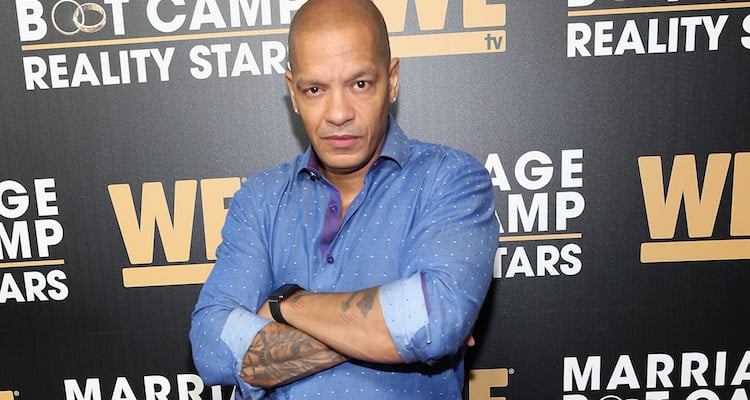 Bennett Raglin/Getty Images for WE tv

From being one half of Lord Tariq and Peter Gunz to heading the Creep Squad, rapper Peter Pankey has been in the hip-hop scene for over two decades, but Peter Gunz’s net worth currently only sits at about $500,000. After his relationship problems aired on Love & Hip Hop: New York, Gunz and his wife, Amina Buddafly, joined the Marriage Boot Camp: Reality Stars cast for season 11. If you want to know more about the rapper, including his life both on and off the screen, here’s Peter Gunz’s wiki.

During the Marriage Boot Camp: Reality Stars season 11 premiere, Peter Gunz wasted no time in adding some drama. On what looked like the first night (thanks to the magic of editing), Gunz called up his ex, Tara Wallace. Along with Amina Buddafly, the three have been in one of the most confusing love triangles we’ve seen on Love & Hip Hop: New York.

Although he claimed that he called Wallace because “she’s having an extremely hard time with me being here,” fans aren’t sure what to believe considering he told her that he loved her before hanging up. Meanwhile, the other couples in the house already sense that Peter Gunz and his wife have a lot to work through.

Our Peter Gunz wiki has more about his family, net worth, and relationship turmoil with Tara Wallace.

Gunz started his career as a rapper in 1996. Along with his friend Sean Hamilton, the two became known as Lord Tariq and Peter Gunz. Although their first and only album wasn’t released until two years later, their careers started helping Whodini write songs for their album Six, and even appeared on the track, “Can’t Get Enough.”

The duo released their first and only album, Make it Reign, in 1998 and the only hit to make it big was “Deja Vu (Uptown Baby),” which peaked at No. 9 on the Billboard Hot 100. Their album also did fairly well on the charts, peaking at No. 38 on the Billboard 200.

After Lord Tariq and Peter Gunz dissolved in 1999, both rappers went solo. Tariq recorded music with Jay-Z and Nas before the two feuded, and Gunz collaborated with Shaq for his albums You Can’t Stop the Reign and Respect.

They briefly reunited for Tariq’s album The Barcode, in which Gunz and his son, Cory, appeared on a track, but they never went on to release another album.

Combining his music career with his success on reality TV, Peter Gunz’s net worth is approximately $500,000.

Peter Gunz, age 48, has 10 children with four women. Despite the drama we saw on Love & Hip Hop: New York, the rapper showed us that all of his baby mamas put the children first with a series of Instagram photos after people were shocked to see Amina Buddafly all smiles while holding Peter Gunz and Tara Wallace’s baby.

Within the last year, the rapper welcomed two children with his current wife and ex-girlfriend. Since then, he reportedly had a vasectomy after rumors of the rapper fathering Teen Mom 2 star Kailyn Lowry’s youngest child surfaced.

Of Peter Gunz’s kids, his eldest, Cory (30), is best known. He is currently signed to Lil Wayne’s Young Money label and appeared alongside his father on Love & Hip Hop: New York.

The rapper has nine other kids: Whitney (who has a child of her own now), Brandon, Kennedi, Phoenix, Jamison (a.k.a. Juice), Kaz (a.k.a. Milk), Cori, Gunner, and Bronx, who are regularly featured on Peter Gunz’s Instagram.

Wallace and Buddafly are mothers to five of Gunz’s children.

You can catch the rapper on Marriage Boot Camp: Reality Stars Friday nights at 9:00 p.m. EST on WE tv.