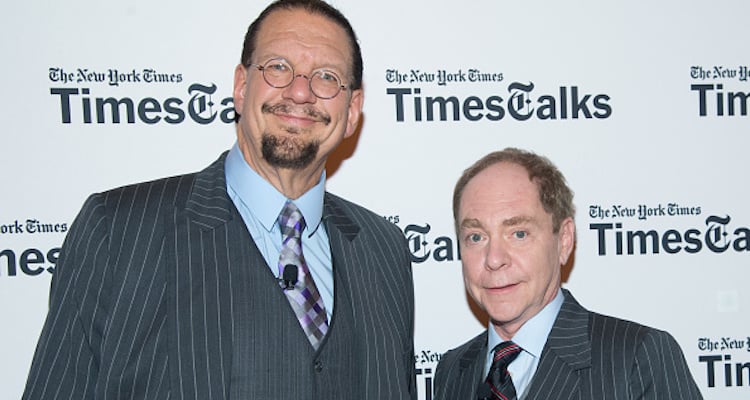 If you love magic tricks as much as Barney Stinson from How I Met Your Mother, then we have some good news for you. Penn & Teller: Fool Us has captivated every kid’s attention (adults, too) and now fans will get to see Penn and Teller’s Las Vegas show this weekend! The duo have wowed audiences for years, earning Penn and Teller a net worth of $300.0 million! Find out about Penn and Teller’s magic show and more, right here!

How Old are Penn and Teller?

Penn Fraser Jillette, 62, (the louder half of the illusionist duo) was born on March 5, 1955 in Greenfield, Massachusetts to Valda Rudolph Parks, a secretary, and Samuel Herbert Jillette, who worked at Greenfield’s Franklin County Jail. Both parents are now deceased. Penn has a sister who’s 23 years older than him and his mother had him when she was 45 years old. He is also an author, actor, comedian, atheist, and a member of Mensa.

Raymond Joseph Teller, 69, (the quieter half of the illusionist duo) was born on February 14, 1948 in Philadelphia, Pennsylvania as the only child of Philadelphia artists, Joe and Irene Teller. He has been practicing magic since 1975 and when he was five, he almost died! He caught a viral infection that developed into a heart disease called myocarditis. After a lengthy stay in the hospital, he was finally able to rest at home and used TV and magic tricks to occupy his time. He once taught high school Latin and when he wasn’t satisfied with the textbook, he wrote his own. Check out the chart below to compare the net worth’s of other famous magicians to Penn & Teller’s.

Penn and Teller’s magic routine is comical and entertaining, and they have been business partners since the ’70s. Both have Emmys and a star on the Hollywood Walk of Fame. They attribute their lengthy success partly due to the fact that they actually aren’t close friends outside of work. But what really works for them is that their differences are the perfect mix that leave the audience wanting more. They are currently in the fourth season of their hit CW show titled Penn & Teller: Fool Us, hosted by How I Met Your Mother alum, Alyson Hannigan. The show is a magic competition that allows contestants to perform magic tricks in order to fool Penn and Teller on how the trick is done. If the contestants win, they get the chance at an opening-act slot in Penn and Teller’s Las Vegas show.

“Magic is confrontational. It always has the tone of mansplaining, conceptually, but we’ve always wanted to change that,” said Jillette to Uproxx magazine. “One way to do this is to give away your secrets, which we’ve done before. Another way is to show audiences what magicians are really like, or can be like, because it really isn’t all that different from someone like Keith Richards asking another musician, ‘Have you seen this riff?’ Maybe the other guitarist has, or maybe they haven’t, but what usually results is them and Richards showing each other their riffs and comparing notes. This is what we wanted Fool Us to be, and what I truly think it has become.”

Are Penn and Teller Gay?

No, they’re not gay, nor are they a secret couple, but we’re not surprised people might think that. Penn’s wife’s name is Emily Zolten, 51, (whom he calls EZ) and they have two kids together: Daughter Moxie CrimeFighter, 12, and son Zolten Penn, 11. The family live together in Las Vegas in their 12,000 square-foot home, which is Penn’s converted bachelor pad.

“I love the name Moxie, I love that’s it’s a purely American word, and those are rare, and I love that it stands for old fashioned spunk and energy,” Penn said to People about his kids’ unusual names. “EZ pushed for her middle name, “CrimeFighter” because EZ doesn’t have a middle name and thinks middle names are stupid. So, it’s just a joke. When she gets pulled over by the police she can show her license and say, ‘We’re on the same side, officer, my middle name is CrimeFighter.'”

He continued: “Z’s name is special enough unless he moves to Hungary, where it’s a very common name. But ‘Z’ seems to be what he’s called and maybe that’ll stick. Zolten is EZ’s maiden name and I like the respect that shows for her family, and I like that his name Zolten Jillette, is the two families together.”

But what about Teller? Is Teller married? No, he isn’t married and he has no children, either. So, if you like magic on a first date, then step right up ladies!

If you’re in Vegas this weekend then you’re in for a great experience! This weekend, Penn and Teller tickets are on sale for their live show on Saturday, July 29 to Wednesday, August 2 at the Penn & Teller Theater, Rio.

Our buddy Jesse Eisenberg joins us tonight to perform a trick on an all-new Fool Us! @jesseeisenberg @thecw @nysmmovie