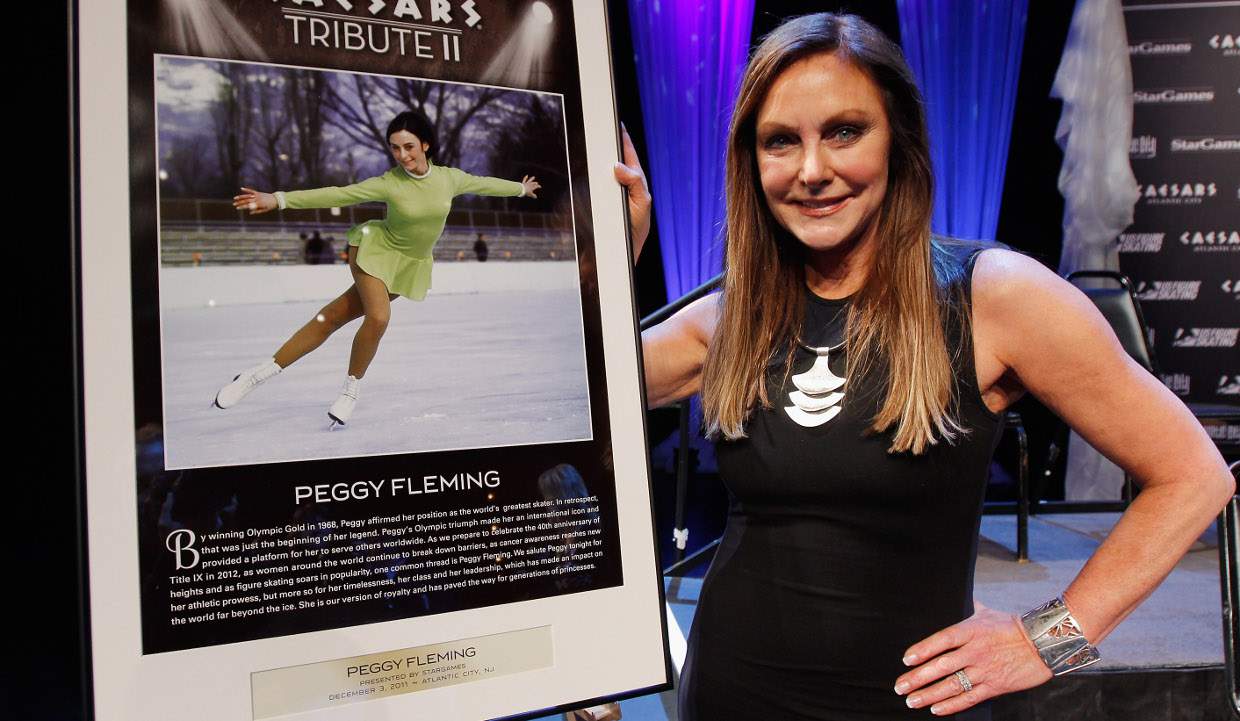 The Winter Olympics is the perfect place for a new star to be born, and 50 years ago, it was no different. Some fans may remember Peggy Fleming playing the role of a judge in the 2007 comedy Blades of Glory, but she is celebrated for her amazing figure skating skills. She won the only gold medal for the U.S. in the 1968 Winter Olympics, and made figure skating history! Where is Peggy Fleming now? Keep reading to find out!

2018 is an important year for Peggy Fleming. It marks five decades of her mesmerizing performance at the 1968 Olympics which led to the only gold medal for the U.S.

Decades later, Fleming still exudes the grace and personality of a star figure skater. She is now a TV star, activist, wife, mother, and grandmother, but will always be a figure skating champion in the hearts of all Americans.

Find out more about the figure skater, her extraordinary accomplishments, and where Peggy Fleming is today.

Born on July 27, 1948, in San Jose California, Fleming burst on the figure skating scene at the age of nine.

Tragedy struck soon after as her coach William Kipp, and the rest of the U.S. figure skating team were killed in a plane crash in 1961. They were headed to the World Figure Skating Championships.

Peggy Fleming’s Olympics success as a 19-year-old made her a star overnight! She rose to fame and made several TV appearances. She was also a skating commentator for ABC Sports.

In 1970, she married Greg Jenkins, a dermatologist and former amateur figure skater who was by Fleming’s side throughout her career. The couple have two sons.

A Television Star and Activist

Other than her appearance in Blades of Glory, Fleming also starred in TV shows like Diagnosis Murder, Newhart, Broadway on Showtime, and a few TV movies. She also performed in several skating shows.

In 1998, she was diagnosed with breast cancer. It was detected in its early stages, and after a successful surgery, she beat the disease.

Fleming went on to become an activist for breast cancer awareness. She and her husband ran a winery in California, and the profits from their Victories Rosé went towards breast cancer research organizations.

Where Is Peggy Fleming Now?

Peggy Fleming’s plastic surgery story is no secret. The skater had a nose job in the ‘70s, and was quite open about it, as she thought it was too long.

But physical fitness has always been important to her. Now, she plays tennis with her family to keep fit saying, “I still try to challenge myself, and I think when you stay engaged and stay moving, you’re healthier, your life is more interesting and it just feels good.”

Talking to NBC’s Anne Thompson earlier this month, Fleming described what she was feeling on the day that changed her life forever, “I look at the footage, and I see myself stepping out on the ice, and I go, ‘Gosh, I don’t look nervous at all.’ But inside, I was terrified.”

She went on to say that she regretted not giving her best that day. But no one noticed as all eyes were fixed on her creativity and skill.

In 2017, Peggy Fleming and her husband moved to Colorado to be closer to their kids and grandkids.

The former figure skating star is also excited about an upcoming skating event, the Peggy Fleming Trophy event, which will be held at the 2018 Broadmoor Open in June 2018.