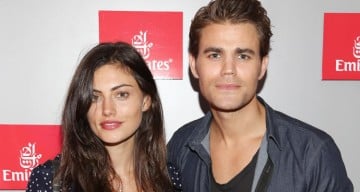 Phoebe Jane Elizabeth Tonkin was born on July 12, 1989, in Sydney, Australia. When she was four-years-old she was enrolled in a few different style of dance classes including hip hop, contemporary, tap dance, and classical ballet. When Tonkin turned 12, she signed up for various courses at the Australian Theater for Young People at the Wharf theater. She graduated from Queenwood School of Girls.

Phoebe is an Australian actress who has been cast in multiple TV series such as, H20: Just Add Water, Tomorrow, When the War Began, The Vampire Diaries, The Secret Circle, and The Originals.

Besides being an actress, she is also into modeling. Initially, she had signed a contract with Chic Management. She has also appeared in several high profile magazines such as, Vogue Australia, Teen Vogue and Elle Australia.

Who is Phoebe Tonkin Dating?

If you were wondering who is Paul Wesley’s girlfriend, then you will be glad to know that he is dating Phoebe Tonkin. He met the gorgeous actress on the set of The Vampire Diaries in 2012. Paul Wesley and Phoebe Tonkin got together in September 2013 and they have been going strong ever since.

If you are wondering about the authors behind the website Your Zen Life, then let us tell you, Phoebe and her best friend Teresa manage the website. It was founded by both of them in 2011 and the website gives amazing insights and tips on healthy eating and tips for mental peace. The two are heavily involved and regularly post content on the website.

She Bagged Her First Acting Role

After trying out for different roles and picking up work in her hometown, she decided she needed to move to L.A. to earn more recognition in the film industry. In 2011, she packed her bags and moved to the city of dreams and just two months after her move, she landed a main role for a show on The CW. She got the role of playing Faye Chamberlain in The Secret Circle. She was also cast opposite Teen Wolf actress Shelley Hennig from September 2011 to end of May, 2012. Keep an eye out for Tonkin as she is now a regular on the CW’s The Originals.