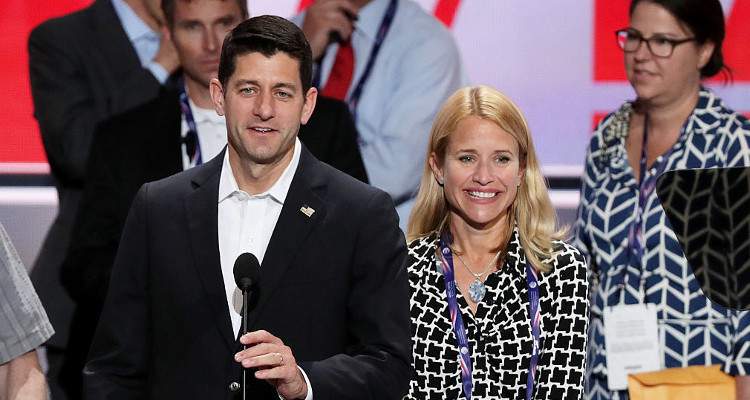 House Speaker Paul Ryan is back in the news after Tuesday’s State of the Union address. Randy Bryce, Ryan’s Democratic challenger for Congress, was in the audience. The House speaker has often taken a strong stance when it comes to political matters, and many say that’s because of the influence of Paul Ryan’s wife, Janna Ryan.

Before Paul Ryan’s 2012 vice presidential bid, Janna Ryan wasn’t well-known outside of Wisconsin’s political circles. Paul Ryan lost to Joe Biden, but the Ryans have remained in the spotlight ever since.

Janna Ryan is not an ordinary stay-at-home mom. Before she got married to Paul Ryan, she was a tax specialist and corporate lobbyist who knew the ins and outs of the political world. And nowadays, she is often seen by her husband’s side during political campaigns or Republican conventions.

Given her youthful looks, many people question Ryan’s wife’s age. So, how old is Paul Ryan’s wife? Born in 1969, Janna Ryan’s age is 48.

Janna Ryan grew up in the small town of Madill in Oklahoma. Her parents, Dan and Prudence Little, were both wealthy attorneys.

While Paul Ryan is a conservative Republican, his wife comes from a family with Democratic roots. She has often been labeled as a “practical conservative” and worked as a congressional aide with Rep. Bill Brewster for a few years.

After her mother passed away in 2010, Janna Ryan inherited between $1.0 million and $5.0 million, according to sources.

From Oklahoma to Washington D.C.

An alumnus of the prestigious Wellesley College, Janna Ryan went on to earn a degree in law from George Washington University. She worked as a congressional aide on Capitol Hill while studying at the law school.

Ryan represented some of the biggest corporate names including Blue Cross/Blue Shield, Pharmaceutical Research and Manufacturers of America, UPS, and more.

Paul Ryan met his future wife when they were both part of the same circles on Capitol Hill. A mutual friend played matchmaker at Janna Ryan’s 30th birthday party. They got married in 2000 in Oklahoma, and she moved to her husband’s hometown of Janesville, Wisconsin.

Paul and Janna Ryan share a love for the great outdoors. Janna Ryan often accompanies her husband on his fishing trips. In fact, the couple’s favorite fishing spot, Big St. Germain Lake, was where Paul Ryan popped the question!

Family comes first for Janna Ryan. She gave up her career as a corporate lobbyist to support her husband’s political career and raise their three kids—Liza, Charles, and Sam Ryan.

Janna Ryan keeps a low profile on social media. But if you head over to Paul Ryan’s Instagram, you’ll find some of Janna Ryan’s pics with their kids.

Being a father is the most important job I will ever have. Wishing all of the dads out there a happy #FathersDay.

Merry Christmas from our family to yours.

Even though she is from a family with Democratic leanings, Janna Ryan has always put her husband’s political aspirations first and often accompanies him to important political events. She, along with the couple’s kids, were a big part of Paul Ryan’s 2012 vice presidential campaign.

Love conquers all, and this is definitely true for Paul and Janna Ryan!