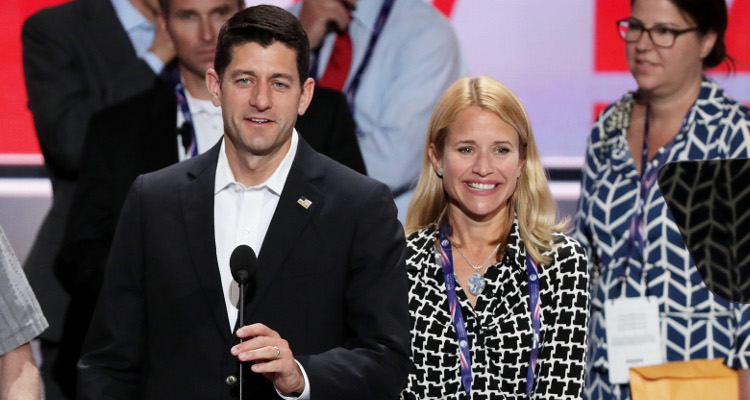 Paul Ryan is the current Speaker of the U.S. House of Representatives and not afraid to critique President Trump. Recently, he claimed Trump messed up with his remarks on Charlottesville.

House of Representatives Speaker, Paul Ryan is a speaker all right! He has a no-holds-barred opinion about President Trump. When Trump’s controversial “locker room talk” video surfaced, Ryan seemed to be wary about the President. Recently, he criticized Trump’s Charlottesville remarks. Though Ryan has been both critical and complimentary of Trump at times, some suggest that it’s Paul Ryan’s wife who pulls the political strings in the Ryan household. Is his wife the reason Paul Ryan doesn’t back Trump? Find out about Janna Ryan and Paul Ryan’s relationship in Janna Ryan’s wiki.

She’s a Tax Attorney and Lobbyist

Fancy that! Considering Paul Ryan is pushing for tax reforms, we wonder if he consulted his wife on the matter. Born Janna Little, the Oklahoma native graduated from Wellesley College, the alma mater of Hillary Clinton. She acquired her degree in law from George Washington State University.

She held several professional titles during her career. After graduating, Janna stayed in Washington and worked as a congressional aide. She later worked as a corporate lobbyist and tax attorney for firms like PriceWaterhouseCooper and Williams & Jenson. As a lobbyist, she backed health-related issues like Blue Cross Blue Shield health insurance company and the American Physical Therapy Association.

She Comes from a Wealthy Family

Janna and her two younger sisters were raised by Dan and Prudence Little, both attorneys. Prudence Little also graduated from Wellesley. The Little family has wealthy ties in Oklahoma. After Prudence, a three-time cancer survivor, died in 2010, Janna inherited a trust fund worth between $1.0 million and $5.0 million.

When Paul Ryan began his political career, his net worth was around $380,000. That got a bump thanks to his wealthy wife and the latest estimates of his net worth is said to be around $7.8 million. Investments and the family construction business also add to his wealth.

She Is a Stay-At-Home Mom

Janna and Paul Ryan met at Capitol Hill where they ran in the same circles. A mutual friend set them up on her 30th birthday. A year later, they got married in Oklahoma when she was 31 years old. They moved to Wisconsin, where Paul was from. She left her job to raise their three kids: Elizabeth, Sam, and Charles.

Even when Paul became a Congressman, Janna stayed behind in Wisconsin to raise their kids. They wanted their kids to have a normal life outside politics. The children are now in their teens, but they shared their father’s political spotlight. The Ryans have posted pictures of their children with Paul in the White House, and they also traveled with Paul when he was Mitt Romney’s running mate in the 2012 presidential race.

Her Family Has Democratic Ties

Janna’s family are related to Oklahoma’s Boren family, the Democratic Party’s royal family in the state. Her mother was a founding member of the Oklahoma Ethics Commission and the Oklahoma Council of Campaign Compliance and Ethical Standards. Her grandfather supported Alabama Gov. George Wallace to earn a spot in the state’s presidential ballot in 1968 election. He also unsuccessfully ran for Governor but it was his son-in-law, David Boren, who eventually earned the title.

Janna campaigned for liberal values in college and was a Democrat. It came as a surprise when she married Paul, who was a conservative Republican. She’s now a prominent figure in Republican circles. Since Paul was Romney’s running mate in the 2012 presidential election, Janna has earned a significant presence in the GOP, despite her political background. She’s described as a “practical conservative” now.

When Paul Ryan refused to fully back then GOP-nominee for president, Donald Trump, there was chatter that his wife had something to do with it. There were reports that Janna, a staunch liberal, voted for Obama twice including in the election when her husband was the Republican opponent.

Snopes disproved the claims saying that there’s no way to prove Janna’s political leanings. It makes no sense that she would vote for her husband’s opponent after campaigning with Paul. The claims may have been concocted to discredit Paul Ryan who didn’t support the GOP nominee when party infighting was at its peak over Trump’s controversial nomination.

Nevertheless, Janna supports her husband while taking a backseat for the sake of their family. You could say that their love transcends political lines.