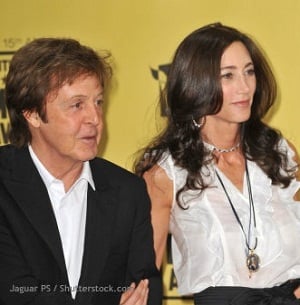 Paul McCartney holds the Guinness World Records title of the most successful composer and recording artist in popular music—he’s sold 100 million albums and has 60 gold discs.

McCartney first found fame as a member of the iconic pop group the Beatles, writing and composing many of their most popular tracks—his song “Yesterday” continues to be one of the most covered titles in history. When the Beatles split up in 1970, McCartney pursued his solo career, which landed him a spot in the Rock and Roll Hall of Fame and Museum in 1999.

In 1963, amid the wild fame of the Beatles, McCartney started dating actress Jane Asher. Only a couple months after getting engaged in 1967, Asher broke it off after she caught him having an affair with another woman. That same year, McCartney connected with photographer Linda Eastman, and the two were married six months later. McCartney often credited Eastman for encouraging him to keep working on his music after the break-up of the Beatles. In 1998, Eastman lost her battle against breast cancer.

Two years after his wife’s death, tabloids had a field day when McCartney was spotted at several events with the much younger Heather Mills, a model who became famous for continuing her runway career with a prosthetic limb after losing half her leg in a car accident. When McCartney and Mills went public with their relationship in January 2000, he was going on 59 and she had just turned 32. They married in 2002, separated in 2006, and officially divorced in 2008. She walked away with $38.5 million in the settlement. McCartney was also ordered to cover their daughter’s nanny and school fees, as well as provide her with an annual salary of $70,000 until she turned 17.

Despite the rocky end to his marriage with Mills, there must have been something that appealed to McCartney about being with a younger woman because, in 2011, he married Nancy Shevell, who was 18 years younger than him. Shevell may not have been a famous model, but she was a success in her own right as the vice president of her family’s New York transportation conglomerate, and a board member of the New York Metropolitan Transportation Authority. She’s also the second cousin of TV personality Barbara Walters, and was reportedly a close friend of McCartney’s first wife.

McCartney and Shevell are still happily married. In fact, his 2012 original track “My Valentine” was written for her, and he performed it for her live at their wedding before releasing it on his album. If the lyrics really do hold true, this celebrity couple is sure to last, because as he sings in the song: “And I will love her for life. And I will never let a day go by without remembering the reasons why. She makes me certain, that I can fly.”