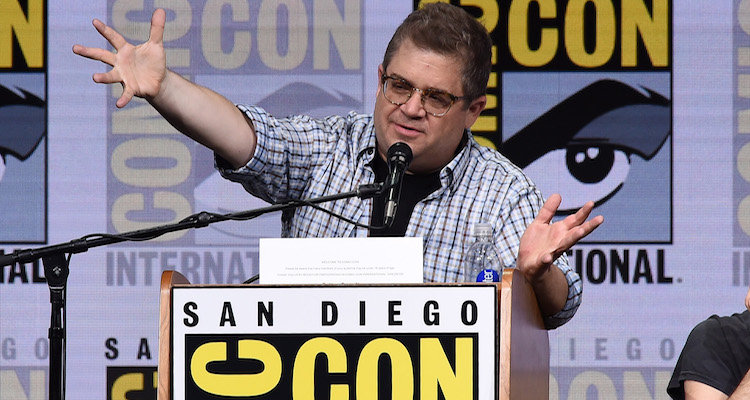 Patton Oswalt: Annihilation debuted on Netflix and is kind of a period of huge ups and downs. His wife tragically passed away, but Oswalt managed to turn the pain of that struggle into art and processed it through his comedy. He’s fighting a war against the President of the United States via Twitter, he managed to find love, and he is getting married again. In our Patton Oswalt wiki, we’ll not only cover the recent up and downs in his tumultuous life, but also discuss his comedy, career, and Patton Oswalt’s net worth.

Patton Peter Oswalt was born on January 27, 1969, in Portsmouth, Virginia. What many people don’t know is that the comedian was named after General George S. Patton, as Oswalt’s dad was a career officer in the U.S. Marines. Growing up with his dad in the military, Oswalt and his younger brother, Matt moved around a bit while they were growing up. The family lived in Ohio and California before stopping in Sterling, Virginia. It would be there that Oswalt would complete high school and go on to the College of William & Mary, where he majored in English.

A Life in Comedy

Oswalt began to make his way into the world of comedy in the late ’80s or early ’90s (Oswalt himself isn’t quite sure). His first major job was as a writer on MADtv and he released a comedy special on HBO in 1996. Shortly after that, he began appearing all over television and film. It started with parts in films like Down Periscope and moved on to larger supporting roles in television shows like King of Queens (he appeared in 122 episodes of the show). He eventually starred in films like Ratatouille and Big Fan.

Once he began getting his feet under him, Patton Oswalt’s tours and comedy specials have done incredibly well for his career, and he is a recognized comedic genius. During that entire time, he managed to have a private life, as well. He married Michelle McNamara, a journalist and true crime writer, on September 24, 2005. Four years later, the couple welcomed Patton Oswalt’s daughter, Alice, into the world.

Just watched my pal @pattonoswalt's @netflix special Annihilation. Wow. A masterful performance by a comic at the absolute top of his game.

One of the amazing things about Oswalt’s comedy is his honesty. His wife soon made her way into his jokes as did Alice, but there was always love there. The jokes were never at their expense, and you could feel the love that he had for his family. Unfortunately, with ups there are downs.

On April 21, 2016, Patton Oswalt’s wife died in her sleep. To say that this was a horrible tragedy would be an understatement. A lot of people would crumble under that kind of pressure and strain, and by the sounds of his interviews, Oswalt came close, but knew he had to hold things together for his daughter. He worked through his pain with the help of his stand up act and a lot of that material can be seen in Patton Oswalt’s Netflix special, Annihilation.

The world soon discovered that the comedian found love again when it was confirmed that Patton Oswalt girlfriend, Meredith Salenger, said yes and the two were engaged as of July 2017. The happy couple is to be married in the very near future.

The last couple of years have been a rollercoaster for Oswalt. He hit tremendous highs and thunderous lows, but kept going and plugging away. His career has never been better, with an Emmy win for his last stand up special, Talking for Clapping and a net worth of approximately $14.0 million. He’s soon getting married to a woman he loves. Here’s hoping this happiness continues for him, especially after such great loss.