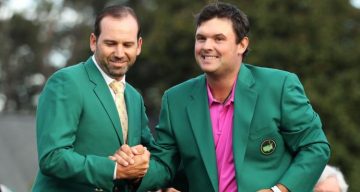 Is Patrick Reed a nice guy? That’s what many are asking today after learning about the professional golfer’s shady past. Patrick Reed’s family drama has made headlines in the past, but now people are wondering about his boot from the University of Georgis. Why did he get expelled from college? Here’s what you need to know about golf’s latest Green jacket winner!

Patrick Reed’s past is filled with drama, and now that he’s in the spotlight after his recent PGA Tour win, many have been looking even deeper into it. Fans learned that he chose to transfer to the University of Georgia (UGA) after just one season to finish his collegiate career at Augusta State, but many do not know why. Golf fanatics took to Twitter to express their distaste for Reed when he became the leader at The Masters after the first two rounds. One person wrote, “If Patrick Reed wins the Masters I will never watch golf again. I will sell my golf clubs and never play again either. I’ll automatically hate the game for the rest of my life.” But why all the hate? And why did Patrick Reed get kicked out of the University of Georgia? We’ve got all the answers you need, right here.

Not even Georgia Bulldogs fans are fans of the former player from their team! But why? Much of the distaste for Reed stems from allegations that he cheated and stole from his teammates at his one year with UGA!

Although Reed adamantly denied the allegations, they were still published in a book by Shane Ryan, Slaying the Tiger: A Year Inside the Ropes on the New PGA Tour. In the book, the author writes about allegations from former teammates that they caught Reed trying to hit another player’s ball on a fairway, after his was lost during a qualifying event.

The players said they confronted him, but he seemed confused. The book also refers to a time when Reed allegedly stole $400, a watch, and a Scotty Cameron putter! When confronted, Reed allegedly claimed that he hustled a professor on the golf course and that’s how he ended up with the goods.

Why Did Patrick Reed Get Kicked Out of UGA?

He transferred from Georgia to UGA but according to reports, his relationships there quickly deteriorated. When he was a minor, he reportedly had two alcohol-related arrests, and although he admitted to the incidents, he still denies the claims that he was suspected of cheating and stealing.

In a 2015 interview with Golf magazine after the final round of the WGC-Cadillac Championship, Reed said, “Everyone knows why I got kicked out of UGA. Because of two drinking incidents.” He added that the allegations of stealing and cheating were false, and if he had to fight them, he would. “And if any of it was true, then the coaches would know about it,” he said.

Whether the allegations were documented or whispered, there have been reports of tension between Patrick Reed, his wife Justine, and his parents Bill and Jeanette. Reed’s parents are reportedly not a fan of his wife but Patrick Reed has stuck by her side. The ugly disputes with his parents have reportedly gone on for years and Reed’s parents do not even attend his tournaments, apparently at their son’s request.

In fact, at the 2014 US Open, Reed’s parents used spare tickets to attend the event, but were escorted out at Justine’s request. Reports say they were also not invited to this year’s Masters event.

According to reports, the couples went back and forth on social media posting nasty comments to each other in 2016. In one post, Justine claimed Patrick’s parents verbally and physically abused him–both his parents denied the claims. Additionally, Reed’s parents were not invited to his wedding, and have had little contact with the Reeds and their two children.

There are few confirmed answers and resolutions to Reed’s dramatic career and personal life, but the consensus seems to be that he’s not the most loved player in the field of professional golf.

The barrage of social media “boos” for the golfer stems from years of his etiquette on the greens, along with a lot of “alleged” behavior he’s displayed throughout his years of playing the game.

Whatever your opinion on him is as a man, you can’t deny his immense talent for the sport!