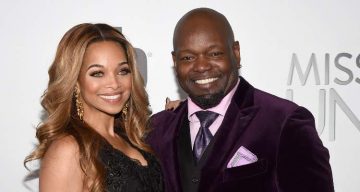 Although Patricia Southall could have had a glamorous career off her stunning looks alone, she chose to educate herself formally and obtained a degree in journalism. Her second marriage to ex-NFL player, Emmitt Smith, has been successful, and she now juggles her time between caring for her husband, raising her kids, writing books, running businesses, and giving to others less fortunate. Southall has a wise head on her shoulders, and her heart is in the right place. Know all about her in Patricia Southall’s wiki right here.

Smith married Southall on April 22, 2000, and it was her second marriage. She was previously married to famous comedian and actor Martin Lawrence from 1995 to 1997.

Southall is an author, philanthropist, motivational speaker, mother, and a former beauty queen, and she manages her various roles and her work very admirably. People are keen to know more about her, so keep reading to know more about Emmitt Smith’s wife.

Born on December 17, 1970, Patricia Southall was raised in Chesapeake, Virginia. She is the founder and spokesperson of Treasure You and a big believer in helping and giving to the less fortunate.

After completing high school, Southall studied journalism at James Madison University, so that she could write and communicate with people the way she wanted.

With her stunning good looks, Southall’s participation in beauty contests was inevitable. She participated in and won the Miss Virginia USA crown in 1993.

Southall then represented Virginia at the Miss USA 1994 pageant, where she was the first runner-up.

Southall Was Married to Martin Lawrence

Southall met Martin Lawrence in the summer of 1992 when she was working in the media office of the Governor of Virginia L. Douglas Wilder. At that time, Lawrence appeared in a Def Comedy Jam concert in Richmond, Virginia, and the attraction was instant.

The couple married in 1995 and were overjoyed when Southall gave birth to their first and only child, a baby girl named Jasmine Page Lawrence, on January 15, 1996. However, the marriage did not work, and they divorced soon afterward in 1997.

It was later that Southall married Smith on April 22, 2000, and by all accounts, it has been a happy and fruitful marriage.

Southall and Smith’s eldest son, EJ has followed in his father’s footsteps and is a top running back prospect. On National Signing Day, he announced that he will play football at Stanford in 2020.

Southall Is a Philanthropist

Both Southall and Smith are big believers in helping others and have donated generously to various causes and non-profit organizations through their foundation, Pat & Emmitt Smith Charities. Their contributions have been appreciated and recognized, and their foundation was among the organizations honored at the Trumpet Awards in 2012.

I ABSOLUTELY LOVE AND TREASURE EACH OF YOU…I can always count on you!!!!!♥️ Thanks for supporting the #Pumpfoundationgala , My hubby and other amazing honorees last night!!!

Also in 2012, Southall was selected by the organization Women of Faith to speak on their Celebrate What Matters Tour.

Southall then released her book titled Second Chances in May 2016, in which she chronicled both the highs and lows of her life.

The happy couple also had their own reality show on the Oprah Winfrey Network called Mr. and Mrs. Smith.

Southall also has a sharp business acumen. She is the CEO of her own company named Pat Smith Enterprises.