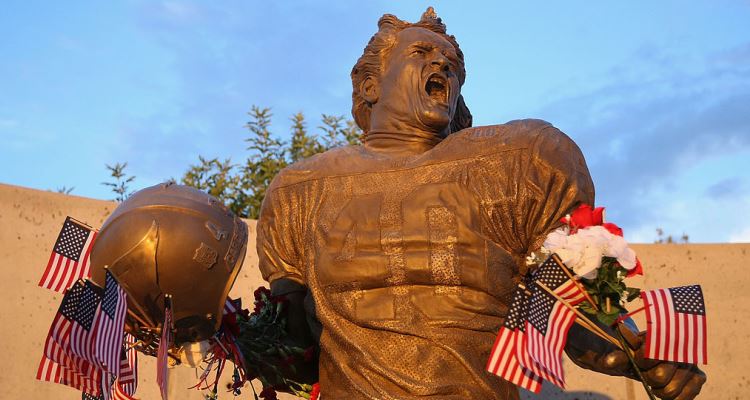 While Confederate statues have been coming down, a heroic statue has already gone up. The Pat Tillman statue has officially been erected on the north side of Sun Devil Stadium at Arizona State University. In the wake o f the unveiling, many have been asking about Pat Tillman’s cause of death and who he was. For more details, take a look at our Pat Tillman wiki.

Who is Pat Tillman?

Patrick Daniel Tillman was a football player and soldier born on November 6, 1976, to Mary and Patrick Tillman Sr. He grew up in San Jose, California and was the oldest of three sons. Patrick, Jr.’s  football talents landed him a scholarship to Arizona State University, which he attended after going to Leland High School.

Patrick Jr. was skilled both in the classroom and on the field. He was a linebacker and helped the team reach new levels throughout the season in the 1990s, which allowed them to go to the Rose Bowl in 1997. He also won awards in school, such as the Clyde B. Smith Academic Award in ’96 and ’97, respectively. He was also the recipient of the Sporting News Honda Scholar-Athlete of the Year Award in ’97 and the Sun Angel Student Athlete of Year Award in ’98.

He was drafted to the Arizona Cardinals in the 1998 NFL draft and even refused a lucrative deal with the St. Louis Rams to stay on board with the Cardinals back in 2001. Why? He was loyal to the team that gave him the start to his career.

“Sports embodied many of the qualities I deem meaningful. However, these last few years, and especially after recent events, I’ve come to appreciate just how shallow and insignificant my role is… It’s no longer important.” Staying humble is one quality Pat Tillman always had. He wasn’t just an inspiring sportsman, he was a man who made his country, friends, family, and teammates proud.

After the 9/11 attacks, Patrick Jr. felt the need to serve his country in a different way and traded in the football for a gun. He, like many others similar him from different jobs, decided to enlist in the U.S. Army. In 2001, he left football and joined the Army Rangers with his younger brother, Kevin and they were assigned to the second battalion of the 75th  Ranger Regiment in Fort Lewis, Washington. On April 22, 2004, Patrick Jr. was killed in action in Afghanistan after several shots to the head while trying to protect another soldier. Although sad, it’s one of the many Pat Tillman highlights of his legacy. There was also the subject of the Pat Tillman conspiracy when much of his death was suspicious and surrounded by differing accounts and unanswered questions. It was later revealed that he was killed by friendly fire and evidence of his death under the Bush administration was concealed, including hiding parts of his body.

“This isn’t about Pat, this is about what they did to Pat and what they did to a nation,” said Pat’s mother, Mary. “By making up these false stories you’re diminishing their true heroism. [The truth] may not be pretty but that’s not what war is all about. It’s ugly, it’s bloody, it’s painful. And to write these glorious tales is really a disservice to the nation.”

While Patrick Jr. already has an ESPY award named after him for athletes-turned soldiers, he now has a statue to help honor his memory.

Pat spent his whole life trying to be the best person he could possibly be,” Tillman’s brother, Kevin, said before the drape was dropped. “He didn’t focus on money, he didn’t focus on fame, he didn’t focus on a pretty statue. It was, ‘How can I make myself a better person in all these different facets of my life?’ And ASU gave him an opportunity to do that.”