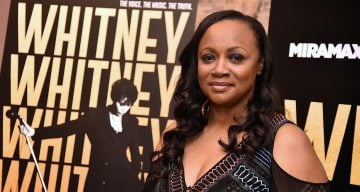 Pat Houston put on her producer’s hat once again, and the result is a documentary titled Whitney. But how is Pat Houston related to Whitney Houston? She is the late singer’s sister-in-law and Bobbi Kristina Brown’s aunt and she had a close relationship with both of them before their eventual deaths. Houston is a former model, the CEO of her own company, and the person in charge of Whitney Houston’s estate. She is married to Whitney’s half-brother, Gary Houston, and has a daughter named Rayah Victoria Houston.

The controversy over Whitney Houston and daughter Bobbi Kristina Brown’s unexpected deaths never seems to die down. Now and then, someone from either Bobby Brown or Whitney Houston’s family goes public with their beliefs about what happened, raking up the issue all over again.

This time, the late singer’s sister-in-law, Pat Houston, is making waves with a documentary she executive produced, which is simply titled Whitney. And now the controversy surrounding the deaths of Whitney Houston and her daughter is in the spotlight once again.

Who Is Pat Houston?

Gary and Pat have a child together, a daughter named Rayah Victoria Houston.

Pat Houston Is a Producer

Pat Houston is a producer, but she has also appeared on TV shows as herself. She rose to fame when she produced the TV series The Houstons: On Our Own, which chronicled her and her family’s lives while they struggled to get past Whitney Houston’s tragic death.

The series debuted in 2012 but lasted only for one season, which constisted of 14 episodes.

She’s Made a Few TV Appearances

Pat also appeared on screen when she attended the 2012 Billboard Music Awards. That same year, she did an interview on Oprah’s Next Chapter.

In 2014, she appeared on shows like The Queen Latifah Show and Oprah: Where Are They Now? She also an interview in 2015 on The Insider.

2018 Has Been a Busy Year for Pat Houston

Pat has been busy this year, as she has appeared on several news/talk shows like Entertainment Tonight, Good Morning America, and the TV series, The Talk.

Join me tomorrow on GMA! #ImGoodYallGood

She is now back in the news because of Whitney, the documentary she produced on her late sister-in-law’s life. It takes another look at the lives of both Whitney Houston and her daughter, Bobbi Kristina.

Also Read: Everything You Need to Know About Bobby Brown’s Kids

Bobbi Kristina Brown Had Agreed to Go to Rehab

Pat said that she was very concerned about her niece’s health and had convinced her to enter rehab a few days before her tragic death on July 26, 2015.

According to Pat, Bobbi Kristina Brown was willing to go to rehab, as long as long as Pat could be there with her. She said Brown made it clear that she did not want her then-boyfriend, Nick Gordon, there.

Pat Houston Has Her Own Company

Even though her full name is Marion Patricia Watson Garland, she prefers to be known by her married name, Pat Houston.

According to sources, Pat grew up in Shelby, North Carolina. She has over 25 years worth of experience in promotions, marketing, and management as the CEO of a company called Whit Nip Media, LLC.

She Has Had a Successful Modeling Career

Pat received an athletic scholarship as well as a liberal arts scholarship from Gardner Webb University. She later studied at the Paris Institute in Paris, France, where she was placed in the top three percent of her class.

While studying in Paris, Pat also carved out a successful career for herself as a model. She worked for famous designers like Givenchy and Michel Klein.

Pat has also appeared in advertisements for brands like Maybelline (Shades of You), Ebony, Essence, BE, and Newport cigarettes. She also modeled for famous catalog companies and made sure that it was both a great earning and learning experience for her.

She’s also the founder and owner of a company named Marion P. Candles, which produces a line of therapeutically scented candles. Pat says she was inspired to start this business because of her special relationship with Whitney.

Who Is Pat Houston Married To?

In 1994, Pat married Gary Houston. He is a retired American professional basketball player for the Denver Nuggets in the NBA.

Rayah and Dad Bowling! Not me

After retiring from basketball, Gary Houston became a duet and background vocalist for Whitney Houston, and he accompanied her on several big tours.

After her sister-in-law’s death, Pat became the president of the Whitney Houston Estate. She is involved with all events and rights regarding the late singer.

She is also the executor of the trust that late singer had set up for Whitney’s daughter, Bobbi Kristina Brown.

However, Pat had a rocky relationship with her niece over the years. Bobbi Kristina Brown could never accept the fact that her aunt had control over her deceased mother’s estate. She also believed that her aunt had called her “unstable” at one point before Brown’s death.

How Much Is Pat Houston Worth?

Although Pat Houston’s net worth is not known, it must be substantial, considering that she has her own companies.

But Pat will not inherit any money from Whitney Houston’s estate. However, according to sources, her  husband Gary is going to get a cut.

In 2017, Houston’s estate was worth a cool $20.0 million and growing, due to the continuous sales of her albums, singles, DVDs, and merchandise.

Whitney Houston Is Always on Her Mind

Whitney Houston and her family are always on the producer’s mind, and this is evident from a look at Pat Houston’s Instagram account. It is full of photos of Whitney, the late star’s brother and mother (Gary and Cissy Houston), Bobbi Kristina Brown, Pat Houston’s daughter Rayah Victoria Houston, and stills from the documentary, Whitney.

There also many photos of Pat Houston herself.

Even as her relatives accuse her of trying to make money off the legendary singer’s estate and not caring enough for her niece when she was alive, Pat Houston is going about her life somberly. She is running her businesses successfully and is keeping the memory of both Whitney Houston and Bobbi Kristina Brown alive with her hard work and passion.