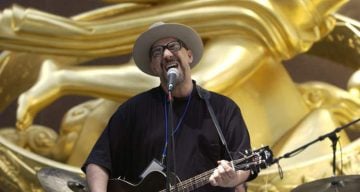 Pat DiNizio was a founding member, lead singer, and songwriter for the much loved New Jersey-based rock band, The Smithereens. He passed away on December 12, 2017, at the age of 62. He released several albums as a solo artist and was the chief architect of his band’s 1960s-influenced power pop music. He was plagued with health problems in the last few years of his life, but still loved making music.

Pat DiNizio, a founding member of the under appreciated rock band The Smithereens, is dead. When did Pat DiNizio die? He passed away on Tuesday, December 12, 2017, at the age of 62. Even though Pat DiNizio’s cause of death has not been revealed yet, it is known that he was plagued by health problems in recent years. In 2015, he had to sit out of performing with his band because he lost the use of his right hand and arm due to a couple of falls that left him with serious nerve damage. His band announced his passing on their website writing, “It is with great sadness that we announce the passing of Pat DiNizio, lead singer, and songwriter of the influential New Jersey rock band, The Smithereens – America’s Band. Pat was looking forward to getting back on the road and seeing his many fans and friends. Please keep Pat in your thoughts and prayers.” Here are a few details from Pat DiNizio’s wiki.

Born on October 12, 1955, in Scotch Plains, New Jersey, DiNizio was the lead singer, songwriter, and member of the New Jersey-based rock band, The Smithereens. The band was known for writing and playing tough but tuneful and catchy 1960’s-influenced power pop. They first gained fame with the success of their single “Blood and Roses” from their debut album, Girls About Town. They went on to release several acclaimed albums like Green Thoughts, 11, Blow Up, A Date with the Smithereens, God Save the Smithereens, and 2011. They also released several live albums like Live in 1988 and Live at the Court: Greatest Hits and More in 2008.

Though they were often accused of sounding dangerously similar to bands like The Byrds and The Beatles, the band pointed out that their music was closer to heavy metal than pop. However, they did admit that their influences ranged from The Who, The Clash, and Costello to Nick Lowe. They were unabashed fans of ’60s pop music and showed their open appreciation to it by creating cover albums of artists like The Who and The Beatles. Their songs were moderate hits, but their fans loved them and rocked to songs like “Only a Memory,” “Too Much Passion,” and “A Girl Like You.”

With lead singer Pat DiNizio of the Smithereens after an incredible show tonight! This guy is amazing and a sweetheart. When I told him my favorite song he began giving me the chords to play it. #thesmithereens #smithereens #rockshow #rockband #pauldinizio

Pat DiNizio worked as a solo artist as well, in-between his gigs with his band. He released several solo albums like Songs and SoundsI Pat Dinizio 2007, and Buddy Holly. He admired other artists and covered some of their songs, especially those of his hero, Buddy Holly. He had a gift for art and worked in several movies during his later career. Some of Pat DiNizio’s movies that people appreciated are Singles, Mr. Smithereen Goes to Washington, King Leisure S.O.B., and Dead Horse. His ventures as an actor, as well as an author, must have generated revenues for him.

Though information on Pat DiDizio’s family is scarce, it was his band mates he seemed closest to. Although he never hit the big time (both in a band and as a solo artist), he was much loved by the people of New Jersey and his fans. People remembered his infectious music and songs like “Strangers When We Meet,” “Behind the Wall of Sleep,” and “In a Lonely Place” and cheered him on even during his days of illness. His fans and his band will always miss him. RIP, Pat DiNizio. We had a great time listening to your music.