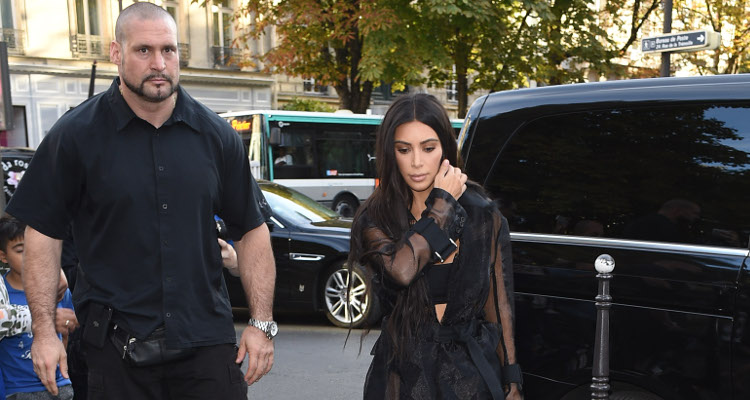 Kim Kardashian had her second altercation with infamous celebrity prankster, Vitalii Sediuk this Wednesday. The prankster attempted to kiss Kim’s famous butt in order to “encourage her and the rest of Kardashian clan to popularise natural beauty among teenage girls”. Fortunately for Kim, Pascal Duvier was there to save the day. Who is Pascal Duvier, you ask? He’s the famous Kardashian-Jenner-West bodyguard. Pascal Duvier is a professional bodyguard with a wide range of experience. He’s known to be scary one moment and a gentle giant the next. After his knightly act to protect Kim, everyone’s very curious about Pascal Duvier. Fortunately for you, we have everything you need to know about Pascal.

Duvier has been Kanye West’s bodyguard since the rapper’s 2014 Yeezus tour in Australia. He’s highly professional and is said to be very good at his job. With the Sediuk incident, he handled the situation with great care.

ReAction. And here is where the legal system has a loophole. If I would have punched, I would have been charged with battery/assault. Action of self defense are only permitted during an ongoing attack/threat. He is known bothering individual and still the law does allow him to do it over and over again. . #Paris #France #Travel #TravelForWork #Security #CP #BiggestBodyguardEver #Protect #ExecutiveProtection #CloseProtection #Reaction #PTT #KTT #KeepThemSafe . VideoCredit: guess who?? ????????????

He’s quite praiseworthy, everyone has to admit. Kim even gave him a shout-out on Twitter for protecting her! Funny enough, Duvier once admitted that handling someone of the Kardashians’ fame can actually be very stressful.

Here’s some interesting facts about the gentle giant, Pascal Duvier.

He Has a Huge Diet

The German bodyguard reportedly needs 18 eggs a day just to meet his daily protein requirement. Being seen with so many celebrities, the bodyguard caught the eye of a reporter who was interviewing Kanye West. Duvier was professional enough to avoid all personal questions regarding his clients but did share the details of his own diet! He said that his diet consists of everything, including fish, meat, fruits, rice, bread, cake and pasta. He says that he requires a large intake of food to fuel his rigorous workout routine.

I was actually thinking to get more food because I knew I would still be hungry after, but then I thought I should actually start with a smaller portion. Breakfast is the most important meal of the day. And no, I still don’t eat 18 eggs. . #Breakfast #Meal #TryingNotToEatToMuch #Food #Eat #Travel #KeepingMeFed #Security #Bodyguard #Protect l#BiggestBodyguardEver #Protection #Energy #Protein #LoadingEnergyAndProtein #WafflePlate #OmelettePlate #OmeletteWithEverything

The 6 ft 4 buff bodyguard is skilled in judo. He acquired most of his military-level protection skills when he did his compulsory military enlistment in the German army. His Linkedin profile lists over 30 skills which will leave you dizzy! It’s no wonder he’s so sought-after. Prior to gurading the Kardashian-West family, Duvier protected the likes of Fergie and Nick Jonas among others.

I always get asked here on social media how I keep up with the gym when I travel. Answer: I always look for gyms that are close by if the hotel has not enough weights in their gym. Today I worked out at SWEAT Fitness in Philly. Great gym. Lat pull down 300LBS (135 kg). . #Gym #Fitness #Power #Strength #Beast #BeastMode #Workout #SweatFitness #Sweat #Fit #StayFit #Travel #TravelForWork #FitOnTheRoad #Security #Protection #Bodyguard #BiggestBodyguardEver #Philadelphia #CP #CloseProtection #EP #ExecutiveProtection #Ready #PTT #Philly #DemocraticNationalConvention #PA #Pensilvania #DNC

He Has Two Daughters

His Instagram profile says he’s a “Proud Dad of 2 beautiful girls.” He travels the world with his clients but when he’s home, it’s all about his daughters. Duvier has often posted pictures of his daughters on Instagram and repeatedly said he’s blessed to have his girls.

He has a Practical Fashion Sense

When at work, Duvier is only seen wearing a black uniform. It’s his self-imposed dress code and he doesn’t want to change it. In his own words, “Black is my option since I’m mainly with musicians, and if I’m at a show on stage I don’t want to be the guy standing out with a white shirt against a dark background.”

Words can not express how thankful I am to be able to work with @kimkardashian and #KanyeWest. They don’t miss a thing and show gratitude at all times. Thank you!!! . Merry Xmas to all of you and I hope you have a blessed Xmas Eve. . #YeezyBoots950 #Yeezy #Season1 #AdidasOriginals #Yeezies #Blessed #Thankful #Xmas #Chistmas #MerryXmas #MerryChristmas #ChristmasEve #XmasEve #FelizNavidad #NocheBuena #FelizNatal #BonNatale #HeiligAbend #BonneNatale

Working for Kanye West also has its perks because the rapper is just as generous as he is eccentric. West has often gifted Duvier with pieces from his clothing line YEEZY. Also, an integral part of Duvier’s bodyguard ensemble is the fanny pack he carries everywhere. According to an interview with HighSnobiety, when asked what he carries inside of it, he jokingly responded with, “I could tell you, but then I would have to break your arms and cut your tongue out so you don’t tell anyone. Still interested?”

He Does Kanye West’s Bidding

Remember that time Kanye stopped his performance at his Sydney concert and said, “I can’t do this song, I can’t do this show until everybody stand up,”? He said only those with a handicap pass are excused. Then, he saw someone seated and sent his bodyguard to confirm whether or not that person was handicapped. That’s right, Duvier was the bodyguard who literally had to confirm the handicap of a person sitting at Kanye’s show, when Kanye had told everyone to stand. The poor guy! People started to recognize Duvier more and more, after he was frequently seen in Keeping Up With The Kardashians.