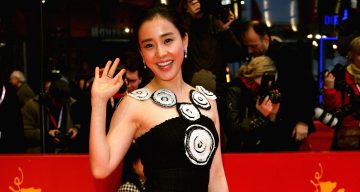 Park Eun Hye, the South Korean actress who became a phenomenon in Asia with the 2003 drama, Jewel in the Palace, surprised her fans with news of her divorce. The 40-year-old revealed she and her husband, Kim Han Sup, are separating after 10 years of marriage. We’ve got more details on the Asian actress’ divorce, right here.

After her breakout role in Jewel in the Palace, South Korean actress Park Eun Hye starred in movies and TV shows in South Korea, China, and Taiwan. She broke hearts all over Asia when she tied the knot on April 27, 2008.

Her husband, Kim Han Sup, is an entrepreneur. They are parents to fraternal twin boys, Kim Jae Wan and Kim Jae Ho.

In a September 14 press release by Park Eun Hye’s label, Early Bird Entertainment, it was announced that the actress got an uncontested divorce from her husband.

They finalized the divorce earlier this month citing differences in values. Park Eun Hye received custody of their sons, and the former couple remain amicable for the sake of coparenting them.

The actress expressed that she will focus on being a mother and her work.

A translation of the agency’s statement reads, “After much time and consideration, Park Eun Hye and her husband have decided to part ways due to differences in values. We are hesitant to speak on the matter as it is her personal life. The couple has agreed for Park Eun Hye to raise the children. We know that she is doing her best as a parent to eat with them and participate in school events with them.”

Park Eun Hye is currently busy with several TV projects including as a panelist on the Korean talk show, Now on My Way to Meet You, which brings North Korean defectors to talk about their experiences acclimating to South Korea.

Who Is Park Eun-Hye’s Husband?

Kim Han Sup is a fairly private person and isn’t photographed much. Even the wedding pictures they released to the public featured Park Eun Hye sans her husband.

Park Eun Hye’s now ex-husband acquired a bachelor’s degree in mechanical engineering from Seoul National University in 1975 and a master’s from the Graduate School of International Trade at Sungkyunkwan University in February 1977.

He was a managing director at Hyundai Heavy Industries at their Industrial Machinery Division Plant from 1978 to 1981.

In 1981, he joined KTB Investment & Securities Co., Ltd., a securities brokerage company in South Korea. He climbed the ladder and currently serves as the president of the company.

Although Kim Han Sup preferred to stay out of his wife’s spotlight, she did speak about him in interviews.

A year into their marriage, Park Eun Hye famously revealed that her on-screen romances made Kim Han Sup jealous, particularly when she shared a kiss with her on-screen love interest. She added that he even refused to watch her famous Taiwanese drama, Silence, so that he didn’t have to watch her romantic scenes.