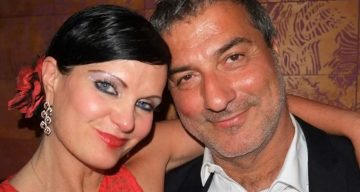 Dreamy gondola rides in Venice, romantic dinners in Greece, and a promised Italian countryside wedding extravaganza —it was all too good to be true! What started off as a whirlwind romance soon ended in tears for former NBC producer Benita Alexander. While shooting for a documentary about renowned surgeon Paolo Macchiarini, Alexander fell in love with the doctor only to discover that he expertly trapped her in his web of lies! Find out everything that happened in Benita Alexander’s wiki.

In May 2015, Benita Alexander’s fairy tale life came crashing down! Her two-year relationship with well-known surgeon Paolo Macchiarini, which was soon progressing to marriage, was discovered to be a cleverly crafted con job!

Macchiarini spun a tight web of lies and deceit, tricking Alexander into thinking he had connections with the Obamas, Vladimir Putin, and even the Pope!

The true story is featured on Investigation Discovery’s He Lied about Everything, a documentary that premiered on Valentine’s Day. Alexander shared her story from the time she met the doctor, to becoming Paolo Macchiarini’s ex-fiancée.

Benita Alexander spent her childhood in Huntington Woods, Michigan. But things were difficult. Her mother left the family just before she turned 16, and a couple of years later, Alexander was asked to leave the house by her father.

She worked in a few local television stations in the 1990s. It was during this time she met and got married to a fellow reporter John Noel. The couple moved to New York City where she joined NBC’s Dateline. Alexander has a daughter, Jessina with Noel.

The couple divorced in 2009 and Alexander got married to ballroom dancer Edson Jeune in 2012.

Also Read: Fox News’ Sandra Smith Wiki: All You Need to Know about the Stunning Reporter!

Sweet Romance, a Web of Lies, and Plenty of Tears!

It all started when Alexander was interviewing Macchiarini for NBC’s documentary, A Leap of Faith. She was soon swept off her feet by the charming doctor, who had no qualms about name-dropping, spending money on expensive European getaways, or even proposing marriage when he was already married for 30 years!

The two spent time in Venice, Greece, and other romantic destinations. Even though Alexander had reservations about mixing professional interests with personal feelings, she put them to rest by deciding she would wait until production was done.

Their romance blossomed, and on Christmas Day 2013, Macchiarini proposed with a $100,000 ring. Wedding planning soon began, and the list of celebrity attendees grew by the day!

Macchiarini convinced Alexander that the Pope would officiate their wedding, Elton John would perform, and the Obamas would be on the guest list for what was labeled as a “wedding for the ages.”

Everything began to unravel when Alexander found out that the Pope was on an official tour during the wedding day, and that none of the intended guests had even heard of Macchiarini.

This betrayal was too much to take for Alexander, who kickstarted her own investigation only to discover that her beau was living with another woman in Barcelona. Most of Macchiarini medical credentials also proved to be untrue!

Where Is Benita Alexander Now?

Alexander’s shocking story is now part of a documentary He Lied about Everything, which premiered on Investigation Discovery Wednesday night.

According to her Twitter bio, Alexander is now working as VP production/director of Efran Films, the company that produced He Lied about Everything.

She is busy promoting her documentary on Twitter. Head over there if you want to see more of Benita Alexander’s photos!

If you missed last night’s premiere, watch this short clip about the documentary. It will shock you beyond belief!

Would you want to be surprised at your own wedding? Benita's fiancé's grand surprises are both romantic and anxiety-inducing. Could he really get the Pope to marry them? #HeLiedAboutEverything premieres Wednesday at 8/7c. ? Watch Sneak Peek https://t.co/x1RZfhhC0o pic.twitter.com/OhqVqoZ5zU