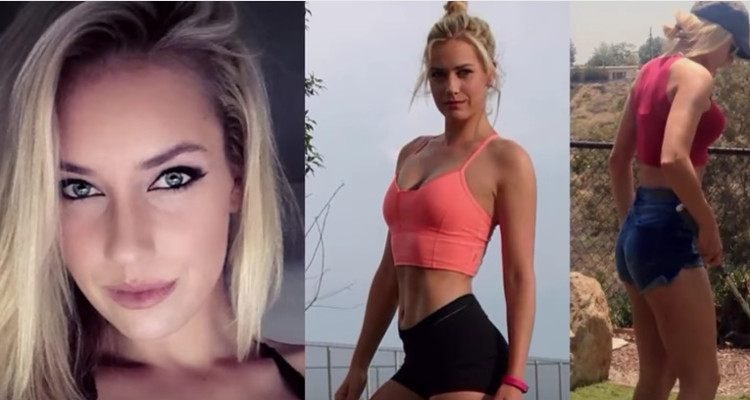 Professional golfer, Paige Spiranac is a not only an excellent player on the greens, but she’s also a hot Instagram star. With one million followers and counting, Spiranac is a social media sensation. However, she unfortunately faced cyber bullying laced with lewd sexual innuendos and harsh criticism for her poor performances in most of last year’s game. To learn more about the 24-year-old golfer, here’s our Paige Spiranac wiki.

Professional golfer, Paige Spiranac was born on March 26, 1993 in Scottsdale, Arizona to Dan and Annette Spiranac. She has a sister named Lexie Spiranac and she studied at the Mesa Distance Learning Program. Later, Spiranac graduated from the University of Arizona in 2015 and majored in communications. The golf pro now lives in Phoenix.

The young golfer was a former competitive gymnast and trained at the Karolyi Ranch in Huntsville, Texas. Her entire family is active. Spiranac’s father played free safety on the University of Pittsburgh’s national championship team, while her mother was a professional ballet dancer. Her sister also competed in track and rowing at Stanford!

Reportedly, Paige Spiranac is engaged to former minor league baseball player, Steven Tinoco. The two announced their engagement this past February, and nothing has been said about their wedding plans.

The 24-year-old started showing talent at a young age. She qualified for the Junior PGA Championship on four occasions and was a three-time U.S. Girls’ Junior Amateur participant. She also played in the junior’s America Cup and Colorado Junior All-Star teams. During her time at San Diego University, Spiranac helped her team win the Mountain West Conference Golf Championship. She also went on to win Colorado State Match Play tournament.

Paige Spiranac made her pro debut at the Omega Dubai Ladies Masters event in 2015. The next year, she shot a final-round 68 at Orange Tree Golf Resort to win a Cactus Tour event —her first victory since turning pro after graduating from San Diego State.

In December 2016, she took part in the 11th Dubai Ladies Masters on the Majlis Course at the Emirates Golf Club. During a press conference before the tournament, Spiranac broke down while talking about her experiences with cyber bullying after her poor performance in the same event the previous year.

Today, Paige Spiranac has three main sponsors: Callaway, Top Golf, and the Korean clothing brand, Descente. She is also signed with one of the largest sports management firms, Octagon.

The beautiful golfer is a gorgeous young lady. And that is proved by the crazy fan following she has on Instagram! In the summer of 2015, Paige Spiranac’s Instagram exploded seemingly overnight, with myriads of fan following her account. Currently, she has 1.0 million followers on Instagram and has the fourth largest following of any professional golfer, male or female. She first became an Internet sensation when her college golf team’s trick shots video went viral, amassing more than 1.5 million views on YouTube.

Also Watch: McKayla Maroney’s Hot Instagram Pics: Another Side to the American Gymnast

Spiranac became more popular when Sportsgrid crowned her “The hottest female athlete on earth” in 2015. Standing at 5’6’’, she is one of the most attractive female golfers around!

Just to give you an idea of the pro golfer’s glamor quotient, here are a few of Paige Spiranac’s sexy pics from her Instagram!

#2. Her side profile is just as gorgeous!

Oh hey there?? Any fun plans for the weekend?☺️

#4. Looking a little cheeky in this one!

I was going back and forth if I should post this because it's "too sexy" and I was worried I would be called all types of mean names. And then I realized that I'm proud of my body, who I am, and I'm confident in my skin. Last year I was so worried about everyone's opinion of myself but this year I'm going to do what makes me happy. What I wear does not define who I am, my playing ability, or my morals. I know I will never be everyone's cup of tea but I want to stay true to myself. I'm finally confident in my own skin and proud of the person I've become. I'm allowed to be sexy, smart, successful, and strong. #happy #confidenceissexy #loveyourbody #loveyourself #positivevibes

That look when you hear the ice cream truck coming ??☀️?