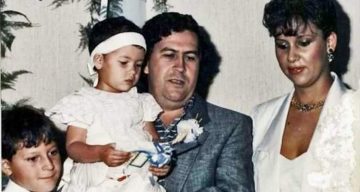 Pablo Escobar’s wife, Maria Victoria Henao, fell in love and married him before she had turned 16. Since then, she stood beside the cocaine smuggler during his highs and lows. After enjoying a lavish life while her husband the Colombian drug lord was alive, Henao had to lead the life of a fugitive with her two children. We have all the details about Pablo Escobar’s wife, right here in our Maria Victoria Henao wiki.

Although not much is known about Maria Victoria Henao’s life before marrying Pablo Escobar, it is known that she met the Cocaine King at the age of 13. Henao’s brother, Mario, worked with Escobar in small-scale criminal enterprises, and it was likely through him that the two met. Despite the 11-year age gap, they began dating and decided to get married.

Maria Victoria Henao’s family disproved of the union, as Escobar was socially inferior to them. But the couple did not care, and eloped. Pablo Escobar married a 15-year-old Henao in March 1976, when he was 26 years old.

Henao gave birth to Juan Pablo (now Sebastián Marroquín) in 1977, and a daughter named Manuela Escobar Heano 1984. The drug lord was notorious for having countless affairs and mistresses, but Henao remained faithful and never left her man, despite his debauchery.

It is speculated that Pablo Escobar’s wife was dependent on the extravagant lifestyle Escobar’s drug money had provided. His estimated net worth of $30.0 billion was perhaps reason enough for Henao to stay with her husband for all those years.

After Escobar’s death in 1993, Maria Victoria Henao fled from Colombia in 1994 with her two children. Her husband’s money was seized by Colombian authorities, leaving the family broke. They took refuge in different countries for short periods of time, as many governments refused to accept them.

Exiled in Argentina, Maria Victoria Henao changed her name to Maria Isabel Santos Caballero to elude the police. She lived a low-profile life in a Buenos Aires apartment with her two children. Her son changed his name to Sebastian Marroquin and is now an architect, designer, lecturer, and author who wrote Pablo Escobar: My Father. He is a motivational speaker, who made a life traveling through Latin America delivering anti-violence talks and pushing for drug policy reform. Not much is known about her daughter, Manuela, except that she changed her name to JuanaManuela Marroquín Santos.

Around 1999, word got out in Argentina about their real identities and, in 2000, Maria Victoria Henao and her son were incarcerated for 15 months on money laundering charges. They were released on grounds of insufficient evidence.

“I am a prisoner in Argentina for being Colombian. They want to try the ghost of Pablo Escobar because they want to prove that Argentina is combating drug trafficking,” Maria Victoria Henao commented during her trial.

Aside from her husband’s reputation and his involvement in large scale drug trafficking, Maria Victoria Henao has led a relatively quiet life and has stayed out of the public eye since leaving Columbia. It seems she intends on keeping it that way.