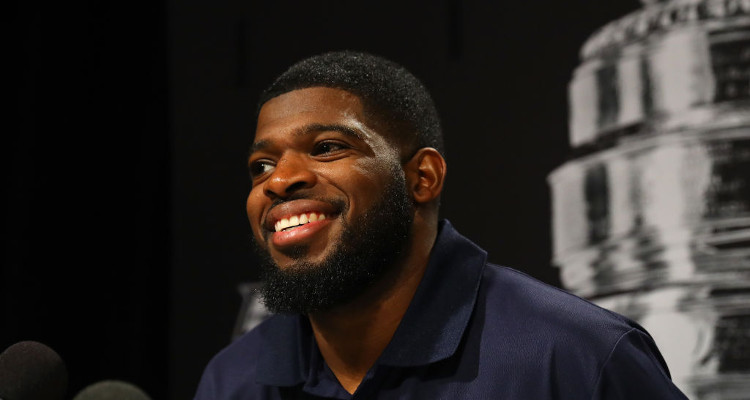 P.K. Subban is one of the leading scorers among the NHL’s defensemen. He’s in command of the rink when he plays. But what about scoring outside the rink? Many are curious to learn more about his personal life. Who is P.K. Subban dating? We’ve got the scoop!

It’s the 2017 free agency phase and the NHL is buzzing! Nevertheless, free agent Andrei Markov chose not to worry about contracts and teams and instead decided to focus on his wedding. And his old Montreal Canadiens teammate, P.K. Subban made sure he didn’t miss it. As far as we know, he didn’t have a date to the wedding, but P.K. Subban does have a girlfriend named Adora. We know the Nashville Predator defenseman is the life of a party, but if you don’t know what we’re talking about, he had a viral moment at the 2017 ESPY Awards. Find out about that and P.K. Subban’s girlfriend, right here in our Adora Nwakwesi wiki.

She Can Fix His Injuries

According to her LinkedIn, Adora Nwakwesi is a rehabilitation therapist working in Toronto, Canada. She has been employed with Lawlor Therapy Support Services since 2015. Before Lawlor, she worked at Agta Home Health Care, where she did a lot in a year. She worked with patients who suffered from brain injuries or underwent traumatic experiences.

Also Read: Who is Jarret Stoll? 5 Facts to Know about Erin Andrews’ Husband

She’s Got the Smarts

Nwakwesi isn’t very active on social media, but there are a few pictures of the beautiful physiotherapist. However, we know she has the brains to match her beauty. She graduated with a Bachelors of Health Sciences from the University of Western Ontario. She also has a project management certification from the University of Toronto.

She was on the Dean’s Honors List at Western University and earned an Entrance Scholarship of Distinction. Nwakwesi also won the Marcus Mosiah Garvey Scholarship from the Jamaican Canadian Association.

While she studied health sciences, Nwakwesi put her project management certification to good use by working in several programs. She did volunteer work at the London and District Distress Center, as well as mentored young adults in the Big Brothers and Big Sisters program.

She was also a research assistant at the Brain and Mind Institute. She coordinated silent auctions for Fundhaiyan, and helped farmers adopt organic farming practices while working with Green Communities.

Subban’s girlfriend describes herself as an “ambitious individual who loves new opportunities and thrives on challenges.” She is known to be proactive and extroverted. We guess that’s how she accomplished so much!

Her motto in life is, “Steer your boat in the direction of your dreams, then let the current and wind carry you forward.” Words to live by!

She appears to be a private person. Not only is there no social media activity by her, but she also doesn’t appear in Subban’s Instagram.

people say a girl called Adora Nwakwesi is his gf.
This is a picture of them pic.twitter.com/ZSwUURtARs