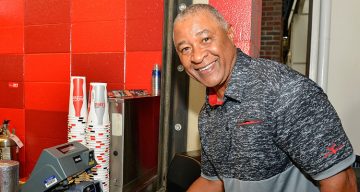 Former baseball shortstop, Ozzie Smith will be making an appearance on Celebrity Family Feud tonight (July 9). Here is everything you need to know from Ozzie Smith’s wiki.

Born Osborne Earl Smith on December 26, 1954, Ozzie Smith’s age is 62. He was born in Mobile, Alabama to Clovi and Marvella Smith. He is the second of six children and his father was employed as a sandblaster at Brookley Air Force Base. Smith’s mother was a huge supporter of her son and encouraged him to complete his education and follow his dreams.

From a very young age, Smith had a love for baseball. While in high school, he played baseball with future Hall of Famer Eddie Murray, and had a partial scholarship to California Polytechnic State University-San Luis Obispo. In 1977, Smith was selected by the San Diego Padres in the fourth round of the draft.

It seems like yesterday I was out on the field doing flips and turning two for the @cardinals. Excited to remember those moments and share the untold stories of my career with you and @joebuck this week on #UndeniableShow. Sit down with us Wednesday only on @AudienceSports, 8pm ET/PT. #Baseball

#CardinalsNation, you ready to join me tonight on the #UndeniableShow with @joebuck? I’m sharing some of the best memories of my life! You won’t want to miss this. Tune in at 8pm on @AudienceSports. #AUDIENCEsports #baseball

Smith spent one year in the minors before he was named as the Padres’ starting shortstop for the 1978 season. He quickly gained attention with his skills and ranked no. 2 in the National League Rookie of the Year Award voting, and became known for coining the ‘Ozzie Smith Flip.’ During the last game of the season, a team member persuaded Smith to do a backflip on the field, something he would regularly do at the beginning and end of each season. He played for the San Diego Padres until 1981, and then for the St. Louis Cardinals until 1996. Smith announced his retirement in 1996 with an impressive 15 all-star selections, 2,460 hits, and 580 stolen bases.

Caught up with new HOFer and friend @pudgerodriguez7 in Chicago. We'll see him in Cooperstown this summer! ⚾️⚾️

Smith’s net worth is estimated to be $15.0 million, and is a result of his hard work and MLB career. He was an excellent player whose nickname was “The Wizard.” For his skills, he won several awards and still remains one of the greatest defensive baseball players today.

Smith married Ethel Denise Jackson in 1980. However, the couple headed towards splitsville in 1986. They have three children together: Dustin, Nikko, and Taryn. Nikko is a singer and a songwriter, who was featured on Season 4 of American Idol.

Did a #pricelesssurprises event for MasterCard with @TonyGwynnJr today T #asg2016

After retiring from baseball, Smith hosted This Week in Baseball and reported for CNN, Sports Illustrated, and the Fox Sports Network. When he is not focusing on baseball, he spends his free time playing golf.