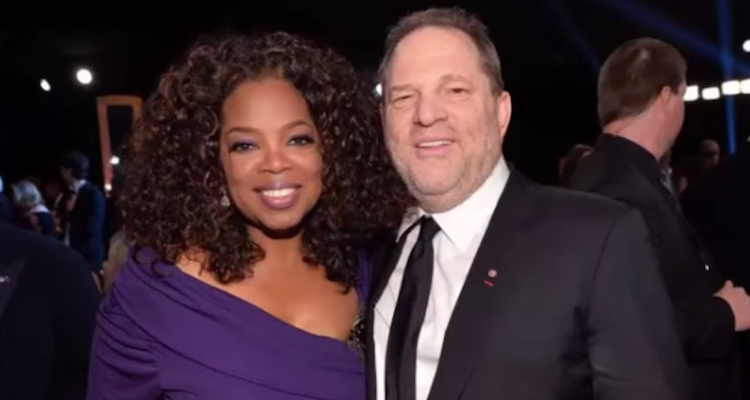 Politically, opinions in Hollywood can change in a second. Someone who was once the biggest star ever can be ostracized in a minute. The day following the Golden Globes, many in Hollywood were calling for Oprah to run against Donald Trump in the next election. A few days later, a number of people in Hollywood have gone 180 degrees and are accusing Oprah of knowing that Harvey Weinstein was sexually harassing the women who have accused him. What caused this change in opinion? Did Oprah know about Harvey Weinstein? And what about that photo of Oprah kissing Weinstein? We’ll examine the entire situation and try to get to the bottom of not only the current controversy, but what the truth is about Oprah and Harvey Weinstein’s relationship.

At this year’s Golden Globe Awards, the focus wasn’t really on the awards as much as it was the situation surrounding the event. Many celebrities banded together to tell the world that the time for sexual harassment and inequality for women in the workplace, is over. A majority of actors wore black and many women brought activists as their guests. A joke about Oprah running for president began to gain traction in the mainstream media after host Seth Meyers’ monologue. In short, it looked like change would actually occur within Hollywood, and perhaps the rest of the world.

But two days after the awards, there were rumblings that everything wasn’t as unified as we thought. A number of Harvey Weinstein’s accusers —Asia Argento, Rose McGowan, and Rossana Arquette— tweeted that they weren’t invited to the Golden Globes Awards ceremony! They were the actors who risked everything and came out with their stories, why weren’t they included? And then came Seal with an Instagram post.

Oh I forgot, that's right…..you'd heard the rumours but you had no idea he was actually serially assaulting young stary-eyed actresses who in turn had no idea what they were getting into. My bad. #SanctimoniousHollywood

Musician Seal fired a shot at Oprah with an Instagram post, where he showed a picture of Oprah being friendly with Harvey Weinstein with the caption:

“Oh I forgot, that’s right…..you’d heard the rumors but you had no idea he was actually serially assaulting young starry-eyed actresses who in turn had no idea what they were getting into. My bad. #SanctimoniousHollywood”

The Oprah/Harvey Weinstein photo was floating around for a while, but Seal’s response to the Hollywood hoopla surrounding calls of Oprah to run for president was one of the first from a star to say something that gained traction.

The photo that was used in Seal’s post is very much real. That is actually Oprah kissing Harvey Weinstein on the cheek at the 2014 Critics’ Choice Movie Awards. Does this mean Oprah knew about Harvey Weinstein’s sexual harassment of so many women?

No one can say for sure other than Oprah. What can be said is that the stories about Weinstein were incredibly prominent throughout Hollywood, with many now regarding it as more of an open secret that wasn’t acted on, instead of a rumor. Apparently, many people knew, very few spoke up. Weinstein and Oprah knew each other through various channels. Both heavily donated to Barack Obama’s presidential campaigns. Adding to that, The Weinstein Company distributed The Butler, a film Oprah starred in.

Did Oprah know about Harvey Weinstein? Maybe, but the truth of the matter is, she wouldn’t have been the only one to hear stories and brush them off, possibly thinking that the stories she heard did not match up with the person she knew. Only Oprah and her conscious knows for sure.