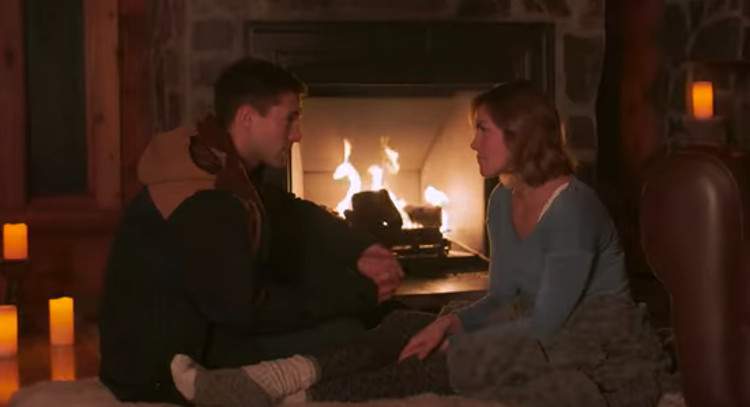 Written by Erinne Dobson and directed by Gary Yates, One Winter Weekend is the story of Cara, a magazine writer who gets dumped by her boyfriend on New Year’s Eve. After being pressured by her employer to write about yet another travel experience, she plans a spontaneous ski getaway with her best friend in search of inspiration. Little do they know that adventure awaits them in this snow-clad region.

Life begins to pleasantly unfold when they find themselves double-booked with two eligible men, one of whom is Ben, an entrepreneur. Soon enough, romance fills the air and Cara and Ben are drawn to each other.

Taylor Cole is best known for her regular roles in television series The Event and Summerland. She has also played recurring roles in other series such as Originals, The Glades, CSI: Miami, Secret Girlfriend, Impastor, Heroes, and Heroes: The Recruit. Additionally, she has done guest performances on several shows.

Cole appeared in the feature film, The Green Hornet, and starred in Dumbbells. It was her role in Dumbbells that won her the Gold Award as Best Actress in a Leading Role at the International Independent Film Awards.

The actress has also worked in other films such as 12 Rounds, Surrogates, Loaded, and April Fool’s Day.

Rukiya Bernard appears in the television series Van Helsing and stars in HGTV’s Stagers. She recently appeared in the Hallmark Channel original movie, Christmas in Evergreen. Bernard has also appeared in episodes of Proof, Supernatural, Intruders, Witches of East End, and The Haunting Hour.

Outfit #2 at the #ubcpactra awards provided by @marciano Thanks for making this mama and 1st time host look and feel like hot stuff! #hostess #awardsshow #thx @ubcp_actra

Bernard’s feature film credits include Wonder, Tooth Fairy, The Cabin in the Woods, and The Day the Earth Stood Still.

Jack Turner studied psychology at the University of Oxford. After completing his education, he moved to San Francisco where he found employment with Google and worked there for five years. And it was while working there that Turner enrolled in a local acting class and realized that he wanted to be an actor.

@marinelayer catalogs hitting homes today! Let me know if you get one!

In 2012, Turner moved to Los Angeles and began working in television, films, and commercials. His first film was The 10 Year Plan.

It is interesting to note that Jack Turner has starred opposite Taylor Cole, his One Winter Weekend co-star, in the Hallmark Channel original movie My Summer Prince. He has also appeared on Stitchers for two seasons where he played the character, Liam Granger.

Dewshane Williams is from Jamaica. He moved to Canada in 1997 where he enrolled at the Toronto Fine Arts High School. Shortly after, Williams was cast as a lead in the musical, Grease. He has also starred in Fiddler on the Roof and The Music Man.

Williams later bagged a regular role on Disney XD’s Baxter. Since then, he has appeared in several series such as Nikita, Flashpoint, Being Erica, Lost Girl, and Saving Hope.

If you haven’t watched the trailer already then you can do so right here:

Doesn’t it look great? Are you excited to watch One Winter Weekend on Hallmark? Well, we definitely are!