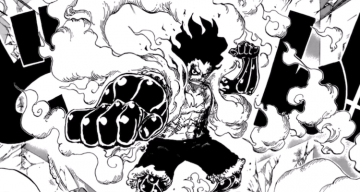 With last week’s chapter of One Piece, many readers are dying to know what happens next. One Piece chapter 895 left with such a great cliffhanger, it’s hard not to want to peek into the future for some One Piece chapter 896 spoilers! We’ll get you ready for the next chapter by taking a quick look at what happened last week, as well as speculating on what we might see in chapter 896. But be warned, this post may contain spoilers. If you haven’t been keeping up with One Piece and don’t want anything to be spoiled, we suggest that you turn back now and come back after you’ve caught up.

Before we get to our predictions on what happens in chapter 896, let’s do a quick chapter 895 recap and get up to speed:

In chapter 895, we got the full reveal of Luffy’s new Gear Fourth form, Snake Man. This form is a bit similar to some of Luffy’s other forms, as it inflates his arms and legs but not quite to the extent that we’ve seen before. Luffy is also much quicker in this form as his punches can change at will.

This leaves Katakuri in a pretty vulnerable spot as Luffy gets a number of solid hits on him. But Katakuri doesn’t take this lying down, and launches a mochi arm covered in flaming Busoshoku Haki and spikes, which he calls the Diced Mochi, and just smashes it into Luffy.

The battle continues with flurries of punches being thrown by both sides. Just before the end of the chapter, Luffy launches into a Gomu Gomu on King Cobra as Katakuri fires up another Diced Mochi, with both combatants looking to end the fight.

With such a huge battle that seems to be coming to an end, fans are dying to know about what is going to happen in chapter 896. Unfortunately, we’re all going to have to wait a little longer as writer and artist, Eiichiro Oda is reportedly taking a week off.

While Oda may be taking a break, that doesn’t mean we have to. To that end, we’ve taken a look into our crystal ball to come up with a few predictions and possible spoilers for chapter 896.

Chapter 896 is probably going to feature the end of the fight between Luffy and Katakuri —or pretty close to it. This battle has been going on for a while now and while One Piece fights can last for a number of chapters, this isn’t Dragon Ball and we’re pretty sure that an end is in sight.

Luffy is obviously going to be the one left standing after the fight ends. That being said, don’t expect him to develop or show off any new powers at the end of the fight, with the exception of whatever he uses for the final knock out.