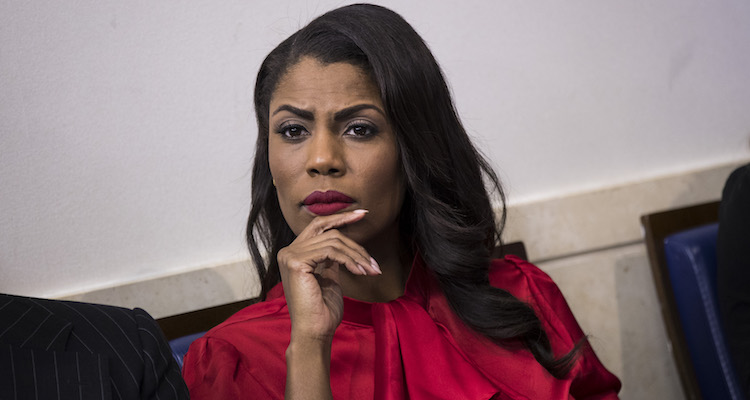 Omarosa Manigault, 43, is best known for her role as the controversial participant on The Apprentice.

Manigault was born on February 15, 1974, in Youngstown, Ohio, and went to The Rayden School, later earning a broadcast journalism degree at Central State University. She moved to Washington, D.C. and earned a master’s and PhD in communications.

Manigault was married to Aaron Stallworth from 2000 to 2005. But, she found love again.

In April, Manigault got married for a second time to Florida Pastor John Allen Newman. They exchanged vows at the Trump International Hotel in Washington, D.C. and she wore a “YSA Makino cap sleeve blush tulle beaded ball gown with a cathedral train,” while the groom wore a brown suit.

Manigault picked out her dress form Kleinfeld Bridal in New York City and was on an episode of Say Yes to the Dress, for which Kleinfeld gave her $25,000 in bridal merchandise. She was set to marry the pastor at a church in Florida but changed venues after receiving death threats.

Manigault is finding herself on the outside of the Trump administration. And, there seems to be some confusion about how the former White House aide made her exit.

“Omarosa did not resign. She was even escorted out of [t]he building and off campus,” Ryan reported.

“She was very upset and said she wanted to speak to the president. According to sources, Gen. Kelly said the president was already informed and he signed off,” Ryan said in her report and later on Twitter.

“Sources say General Kelly did the firing and Omarosa is alleged to have acted very vulgar and cursed a lot and said she helped elect President Trump,” Ryan also tweeted. “The word is a General Kelly had it and got rid of her.”

Manigault started out as Trump’s director of African-American outreach during his campaign. She later joined the administration as his director of communications for the White House Office of Public Liaisons.

“I just talked to another source in the White House who said Omarosa will be on staff until January 20 and that she is finishing up her work with HBCUs before her official departure. That person disputes that she was escorted out,” Alcindor tweeted.

Manigault’s salary at the White House was reportedly a modest $46,000 in addition to royalty checks and appearance fees that range from $1,000 to $5,000.

Congrats to my friend the brillant Dr. Ben Carson and his family.