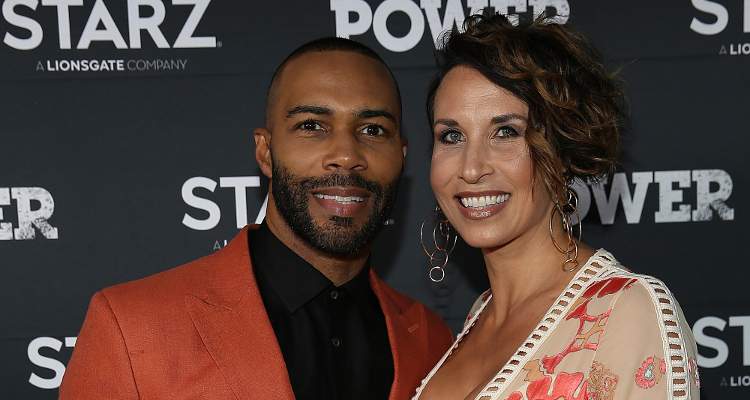 James “Ghost” St. Patrick is the on-screen criminal we’ve come to love on Starz’s Power, who does his saintly name no justice. Omari Hardwick, who plays Ghost, is far from the not-so-innocent drug dealer off-screen. He’s one of the hottest actors on TV right now, so his personal life is bound to get some attention. Unfortunately, Omari Hardwick’s wife got some negative attention from his fans. Find out about Jennifer Pfautch and Omari Hardwick’s marriage, right here.

Some fans are vocally sad that their favorite star is off the market while others cross the line and question their choice of spouse. Omari Hardwick and his wife went through major harassment from his fans in 2014.

Jennifer Pfautch’s age and date of birth remain a mystery, but we do know that she is around 35 years old, according to sources. She is a media professional who keeps a low profile, and her husband was known to keep his family out of the media spotlight. So, there’s very little known about her.

However, Hardwick decided to pay no attention to cameras as he went on a date to a New York City restaurant with Pfautch and their little ones in tow. The photographs of their date became a hot topic on the Twitterverse, especially because it was one of the rare sightings of Jennifer Pfautch fans had seen.

Pfautch has an amazingly tall and toned build. Some Twitter users were quick to react to her appearance and the fact that Hardwick is married to a white woman.

Pfautch was called “ugly” (and every other related word) while the actor’s taste in women was questioned.

Many of his fans didn’t see anything wrong with his wife. But the level of hate from a few of them caused Hardwick to reach his breaking point.

If there was any doubt that Hardwick loved his wife, he proved that he was “Husband of the Year” when he clapped back against people commenting about Pfautch.

In a lengthy Twitter tirade, Hardwick said he wished the haters could experience what it’s like to constantly be in the spotlight and know the real “ugly” characteristics of some people.

In the same string of tweets, the actor mentioned losing his siblings and a son with Pfautch. He now has two little kids with his wife—a daughter and another son.

Omari Hardwick and Jennifer Pfautch’s son is named Brave, and their first-born is Nova. The youngsters have been featured a few times on their Instagram accounts.

He also thanked his fans for their constant support while telling those who stepped out of line to reflect on their behavior.

Hardwick stood up for his wife, which is all a woman can ask for!

Pfautch was a communications major at California Lutheran University where she graduated from in 2004. While studying, she interned at NBC’s Prime Time Entertainment Publicity Department in Burbank, California.

Her job was to compile daily clippings to distribute throughout the department and to the network’s VPs and presidents. Additionally, she worked with press managers and VPs on their projects.

Pfautch helped out at premieres, shoots, and screenings like the world premiere of Las Vegas, a private screening for American Dreams, and a Days of Our Lives party.

After graduating, Pfautch worked with the famous Creative Artists Agency (CAA) for a year. She’s currently a publicist at Paradigm Talent Agency.

Like a supportive wife and a true publicist, she never fails to gush about her handsome husband on Instagram. And she’s always his date at red carpets where she looks fabulous.

True to her message, Hardwick’s wife has a website where she posts inspirational words of wisdom and some great recipes. (BRB, need to try that chicken with capers recipe!)

She Convinced Hardwucj to Join Power

We can’t imagine anyone else but Omari Hardwick as Ghost St. Patrick. But can you imagine if he didn’t accept the role at all?

The 43-year-old was initially hesitant to take the role when Power was offered to him. So, what (or who) made him take it?

In a lengthy Instagram post, Hardwick wrote that he was content with his work over the last decade and was very close to turning down a role that would raise him to “high stature in this business.” But his wife wanted him to accept the role.

“Between the 45 days of prayer from a one @mrsjaeh asking God to ‘help me embrace my Power & Dominion’ (yes, that word: power), & sitting down even a month after THAT with a one @ckagbohofficial & then talking to a one @50cent …..God had answered that prayer & spoke to me,” the actor wrote.

Instead of hating Mrs. Omari Hardwick, we should be grateful that she gave us Ghost!