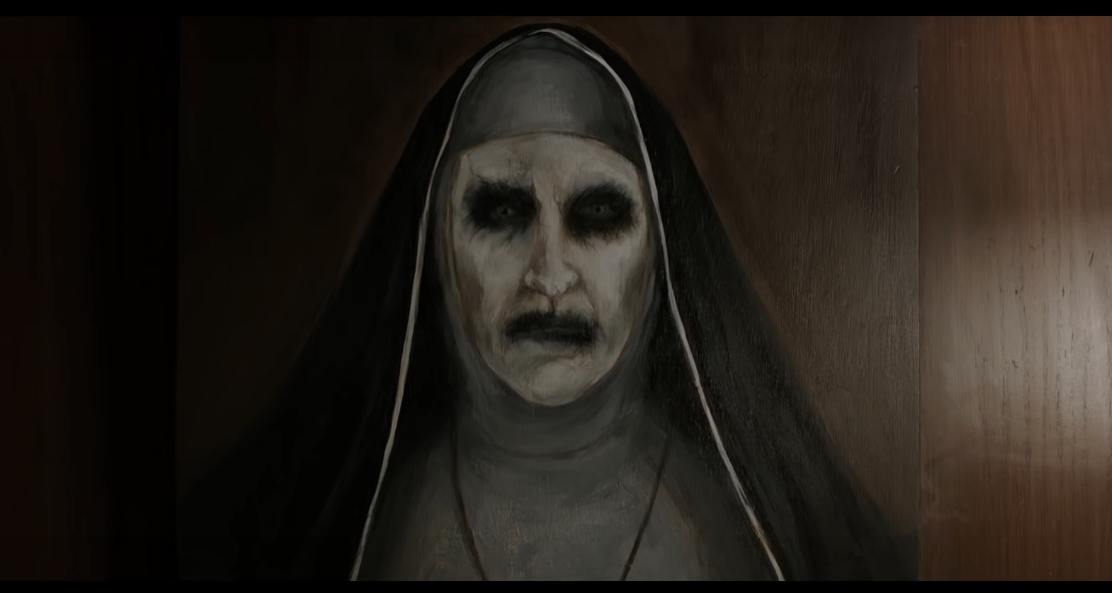 Ready to be terrified? The Conjuring’s spine-chilling prequel, The Nun dropped its first trailer that traces the origins of The Conjuring series. But fans have a lot of questions about the demonic sister we saw in The Conjuring 2.

The most hair-raising part of The Conjuring universe is the disclaimer in the movies that says “based on true events.” Hollywood seamlessly brought to life the real paranormal adventures of Ed and Lorraine Warren. But the movies are setting the Warrens aside for now to break down the eerie backstory of the Enfield poltergeist in The Conjuring 2.

If you haven’t guessed it yet, we’re talking about The Nun. The prequel is set to release in September 2018. But you don’t have to wait that long to know if it’s really based on a true story. We’re going to explain the true story behind the demon nun, Valak. Tread lightly folks!

Is The Nun Real?

In The Conjuring 2, we see Lorraine (Vera Farmiga) terrorized by a demonic presence that held her back from fighting the Enfield poltergeist. The demon reveals itself to be Valak in one of Lorraine’s visions. We later find out that Valak is the ghostly-looking nun Ed (Patrick Wilson) couldn’t stop painting.

Now, this terrifying show-stealer gets its own movie which will explain what The Conjuring 2 didn’t explore.

The Nun may have been an 11th hour decision, but like most of The Conjuring universe, it is truly based on a real entity.

The demon known as Valak has been around since the 17th century thanks to grimoires like Key of Solomon – it’s a “summoning demons for dummies” book, in case you’re wondering.

According to several grimoire texts, Valak doesn’t look like actually Marilyn Manson in corpse paint and nun garb. The demon is described as an angelically-winged boy riding a two-headed dragon. Contrary to his appearance, Valak is wicked in every sense of the word.

Historically speaking, black magic aficionados have been summoning Valak with the hopes of finding hidden treasures. And before you go conjuring this demon to find a missing sock, a word of caution. Valak only helps the “worthy,” like Thor’s hammer-worthy.

If you aren’t worthy, like the words at the end of The Nun trailer, “Pray for forgiveness.” Otherwise, Valak will make your life a living hell, literally.

The Nun conceptualizes Valak differently and goes into a fictionalized backstory for The Conjuring prequel. The story is set in Romania (the movie was shot in Transylvania for added spook) where the Vatican sends a priest and a novitiate to investigate the suicide of a nun.

Obviously the duo uncovers an obscenely unholy presence haunting behind the scenes.

The True Story of the Demon Nun

Valak has gotten a few mentions in movies and TV shows before. But this demon was the true show-stealer in The Conjuring universe with its unexpected cameos.

It’s hard to believe that the nun with the soulless eyes was a last minute addition to the movie. The entire cinematic experience would be “Nun-sense” (pun intended, obvs) without Valak’s sporadic scenes!

As we’ve mentioned before, the demonic nun’s appearance is different from the purported description of the real Valak legend. The silver screen adaption took a little creative license with the real Enfield haunting story by adding the nun-like demon.

The Enfield poltergeist is one of the most well-documented cases of paranormal occurrences. But the original case didn’t have anything have anything to do Valak or demon nuns.

However, Lorraine Warren, who claims to be a clairvoyant, experienced visions of a demon much like Vera Farmiga’s character in the movies.

Lorraine allegedly had nightmares of a malicious, black-veiled entity attacking her husband in bloody ways. She sought out the entity targeting her husband in real life, which led to the revelation that it was the demon Valak. It wasn’t dressed like a nun in her visions, but that was the closest description of it.

Ed Warren passed away over a decade ago, and Lorraine has since retired from the paranormal profession. But apparently she continues to be haunted by Valak to this day. Her efforts to banish him, unlike the movie, have failed. But she has learned to cope with his presence without feeding it more energy.

James Wan, who directed The Conjuring movies, added the demon nun into the movies during reshoots, as he was originally unsure of his vision for what it would look like.

Lorraine, who consulted on the movies, mentioned the entity haunting her in passing and Wan didn’t want to include a CGI-heavy demon. It took a lot of brainstorming to design the demon character until they settled on the nun.

“Because it is a demonic vision that haunts her, that only attacks her, I wanted something that would attack her faith,” Wan explained, “Something that would threaten the safety of her husband. And so that was eventually how the idea of this very iconographic image of a holy icon cemented in my head.”

Wan adapted a spectral entity from Lorraine’s visions and conceptualized Valak, the demon nun. Bonnie Aarons portrays Valak in The Conjuring universe, including The Nun, with limited CGI and more realistic horror.

The Nun is set to terrorize theaters on September 7, 2018.