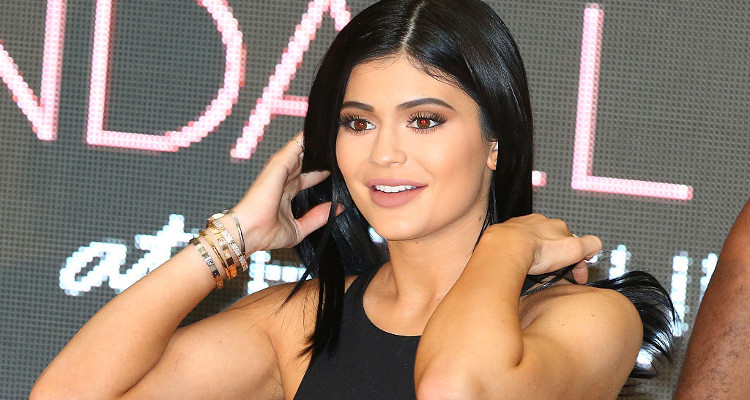 Kylie Jenner got her fans excited when she announced the second pop-up store for Kylie Cosmetics. The Jenner by name and Kardashian by fame businesswoman has been teasing lovers of Kylie Lip Kits with posts about the upcoming store in New York City. But Kylie isn’t just treating her fans to posts about her new pop-up shop, Valentine’s Day Lip Kit collection, or her upcoming clothing line. Her latest picture has her fans going crazy over how gorgeous, regal, and hot she looks. Gush over the royalty that is the Kardashian-Jenner clan in Kylie’s new Instagram post.

There’s no doubt the Kardashian-Jenner sisters and their mother, Kris Jenner are the queens of their unique brand’s empire. Kylie Jenner posted a picture of herself late Wednesday (February 8) night looking like the reality TV royalty she is.

Kylie’s new post has her dressed in a fishnet top with her long raven hair holding an intricate crown on her head. The crown looks straight out of HBO’s Game of Thrones or the CW’s Reign, but by no means looks out of place on the 19-year-old. She captioned the post with a crown emoji. Very apt!

Kylie Jenner and her sisters are avid users of social media, with Kylie being one of the top 10 most followed celebrities on Instagram. She has over 85 million followers who showered the picture with over 500,000 likes within minutes it being uploaded. While many comments call her a flawless queen, there was a large echo of the title, “Baby King Kylie” in the comments.

The title fits Kylie so perfectly, and may be in reference to the reality star’s boyfriend, Tyga. The 27-year-old rapper has a son named, King Cairo with Blac Chyna, Rob Kardashian’s fiancée.

Kylie is currently preparing to open her second Kylie Cosmetics pop-up store in NYC’s Soho district. The store will be selling her Valentine’s Day, birthday, and holiday lip kit collections, and will open on February 13.

Wow can’t believe I’m coming to NYC next week to open up my second Pop Up Shop.. DREAMS!!! I’ll see you guys there.. Address: 27 Mercer St. New York City When: 2/13/17 I’ll open the doors at 10am that morning & will be open daily until 9pm! Store will stay there until supplies run out! XOXO ** Yes, we will be open on Valentines Day