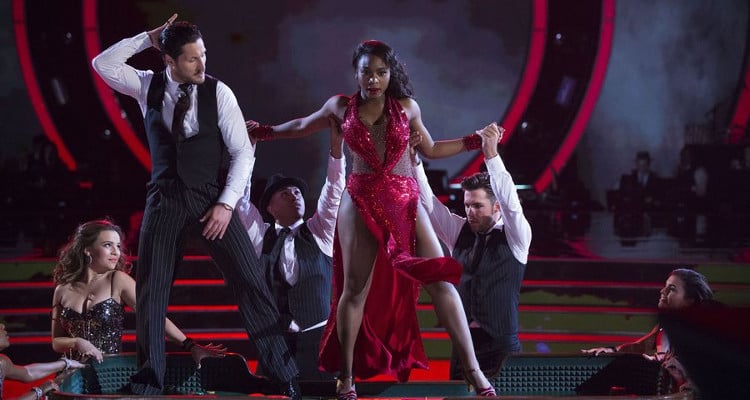 Fifth Harmony’s, Normani Kordei is proving a tough contender for the coveted Mirrorball Trophy! Normani and her partner, Valentin Chmerkovskiy dominated Dancing with the Stars week 3 and left us wanting more!

Every member of Fifth Harmony is a vocal powerhouse. But we got a taste of their performance quality when Normani Kordei stepped onto the ballroom floor. Normani and Val Chmerkovskiy quickstepped their way into everyone’s hearts, immediately making them fan favorites.

Looking like a vision in white, they danced to Erin Bowman’s “Good Time, Good Life” and even earned Bowman’s praise. “She did such a good job,” Bowman said in an interview. “I love Fifth Harmony, and to have Normani dance to my song is amazing. I think it really worked, and I hope their fanbase liked the song.”

The couple earned a disappointing score of 27 out of a possible 40, but since it was only the first week, they took it in stride. Further into the competition, Normani and Val proved they have nowhere to go but up.

Also Read: David Ross on “Dancing with the Stars” 2017: The Possible Dark Horse This Season

Normani gave a high-energy cha-cha in the second week of Dancing with the Stars, and her energy was infectious, earning her a well-deserved 32. While she’s no stranger to bringing it in performances, getting the ballroom moves down does require practice and lot of time in rehearsals.

Fifth Harmony is currently on their 7/27 Concert Tour, which cuts into Normani and Val’s rehearsal time together. So, either Normani makes the travel back and forth, or Val would sometimes accompany her on tour. The 20-year-old is definitely pulling out all stops to win. She doesn’t have a boyfriend, but we can see how Val traveling with her could spark dating rumors.

For her Vegas theme performance, Normani Kordei and Val Chmerkovskiy rehearsed in Hong Kong —one of the stops in the 7/27 Tour. With no time for jet-lag, the couple brought their A-game for the night.

DWTS went Vegas last week, and the routines were better than ever! The couples rolled the dice on the ballroom to see who would win the jackpot and the ladies were the winners. Nancy Kerrigan, Heather Morris, Simone Biles, and Normani Kordei set the ballroom on fire with their routines.

The producers truly saved the best for last. Normani and Val were the last couple to hit the ballroom, and they did the foxtrot which blew our minds away. They rightfully earned the highest score (33/40) of the night, and the judges had a treasure chest full of Vegas themed compliments for her.

“Like I said before, jetlag works for you,” the host with the best sense of humor, Tom Bergeron quipped. “You two broke the bank in Vegas and walked with the prize! That was fabulous,” Bruno Tonioli said.

Get your tissues ready for tonight for the “Most Memorable Year of My Life” theme on DWTS, which you know gets emotional! We wonder what Normani Kordei’s most memorable year is. Whatever it is, she won’t be in it alone. The rest of Fifth Harmony is set to join her tonight and perform, too! That’s certainly some great campaigning!

Don’t miss Dancing with the Stars every Monday at 8:00 p.m. EST on ABC.