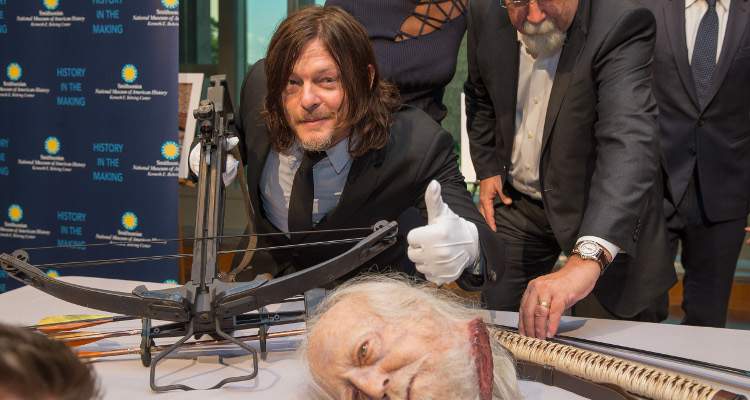 The Walking Dead is the highest rated TV show in cable history, garnering viewers and fans by the millions. So, it’s no surprise that its cast rakes in the money! Norman Reedus, who plays Daryl Dixon, has a net worth of $18.0 million. Keep reading to learn all about how he made his vast fortune!

Who would’ve thought that fighting zombies could be such a lucrative career! The stars of AMC’s post-apocalyptic juggernaut, The Walking Dead earned a pretty penny from the show, but none more so than the gritty badass incarnate, Daryl Dixon himself. How rich is Norman Reedus? The actor has amassed a net worth of $18.0 million in his career. We’re going to break down Norman Reedus’ net worth to give you an idea of exactly where he made his millions.

Compared to other networks, AMC is still behind in terms of the cast’s pay grade. But TWD is not going to stop anytime soon, which means the money will keep pouring in and the cast will see their cut. You might not be aware, but Norman Reedus is actually dating another big Hollywood star. Reports have confirmed he is officially Diane Kruger’s beau, and is the highest-paid among the cast, more so than leading man, Andrew Lincoln.

He has a net worth estimated at $18.0 million and is reported to earn an astonishing $650,000 per episode. His colleagues get paid as much as him, but Reedus’ other projects also ensure his wealth never declines.

Reedus and Lincoln, being indispensable to show, renegotiated for a higher salary. They reportedly went from $550,000 per episode in season 7 to $650,000 in season 8. Initially, the two biggest stars of the show only earned $80,000 per episode for Reedus, and $90,000 for Lincoln.

The following table illustrates how Norman Reedus ranks in comparison to other TWD cast members.

Did you know? The original TWD comic books don’t have a character named Daryl. But when Reedus auditioned for the role of Merle, Daryl’s brother on the show, the character was created just so Reedus could play him. And now, we can’t imagine TWD without Daryl!

All Work and Play

The Florida-born Reedus spent his childhood in different parts of the world. His amateur acting career began in theater. During his youth, he worked at a Harley-Davidson shop. There he got into a fight, was fired, and went to a party in L.A., where he was discovered and cast in a play. From then, he went on to expand his acting credits.

He debuted with the horror flick, Mimic in 1996. After several starring roles, his most famous work came with The Boondock Saints, which spawned a sequel in which he also starred. His other noteworthy film credits include Deuces Wild, 8mm, and Floating.

While he was an on-screen badass, Reedus used his charisma to model for major brands like Prada, Lexus, and Levis. He posed for cruelty-free ad campaigns and appeared in music videos for Keith Richards, Lady Gaga, Hilary Duff, and other artists.

He’s also gone beyond acting and is a critically-acclaimed photographer, sculptor, and painter. He displayed his works in art galleries in New York, Berlin, and Frankfurt. He even published a photography book, The Sun’s Coming Up… Like a Big Bald Head in 2013.

It’s very hard to find a safe haven in the TWD universe, but Reedus found himself one…then another. The 48-year-old dropped $3.8 million on a luxurious penthouse unit in New York back in 2013. He owned a few more houses in the same Little Italy building. He sold a condo in that building for $2.08 million that same year.

In a move that would appall TWD fans if it happened on the show, Reedus bought a home very close to Negan, a.k.a., Jeffrey Dean Morgan, in 2016. The Hudson Valley home in New York is not that far from Morgan’s Dutchess County estate. They may be opponents on the show, but Reedus and Morgan have a friendship that goes way back in real life! So, Daryl is not really invading Negan’s sanctuary in case you were wondering.

Reedus is currently dating Diane Kruger, but his most famous relationship was with supermodel, Helena Christensen. They never married but they have a son, Mingus, who is following his parents’ modeling footsteps. The couple maintain an amicable relationship and share joint custody of their now 18-year-old son.