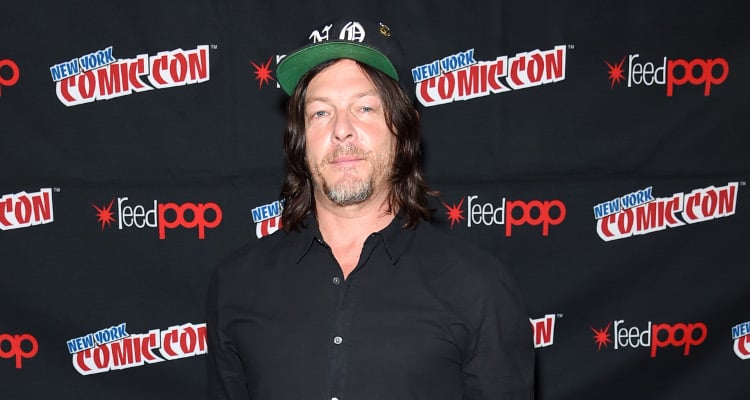 Daryl Dixon’s romantic life may not be ideal, but Norman Reedus, who plays him on The Walking Dead, has dated some notable women in real life. To learn about the ladies once linked to one of our favorite TWD stars, take a look at Norman Reedus’ dating timeline, right here.

Right before The Walking Dead season 8 premiere, Norman Reedus said his character, Daryl wasn’t ready for dating. With Rick, Daryl, and their pals ready to go to war against Negan, we’re certain Daryl’s not in the right head space for romance. But that doesn’t mean Norman Reedus’ dating life has been in a slump! Who is Norman Reedus dating? Find out about his high profile relationship history and Norman Reedus’ girlfriend in 2017 below.

Reedus’ most famous relationship was with former Victoria’s Secret Angel, Helena Christensen. Before nailing badass roles on the small screen, Reedus began his career as a model. Thanks to which, he began dating the hottest supermodel around.

Beginning in 1998, Reedus and Christensen dated for five years. There were rumors that they got married, but the pair themselves shot them down. The model gave birth to their son, Mingus Reedus in October 1999.

After they split in 2003, they remained good friends and raised their son together. Christensen even gushed about her affection for her ex saying, “There are just some people in my life whom I would fight for until the end, no matter what. And Norman is one of them.”

Modeling is a family affair for Mingus Reedus, who debuted in the industry. He walked the runway for the first time in a Calvin Klein show.

Reedus has been at the center of dating rumors with famous women like his TWD co-stars, Laurie Holden and Emily Kinney, as well as Rose McGowan when he appeared on her breakthrough show, Charmed. Among his many speculated romances was Sports Illustrated model, Jarah Mariano.

They reportedly dated for a year in 2009 after a film event in New York City. But their romance eventually fizzled out.

The 48-year-old keeps his personal life under wraps so some of his relationships are never confirmed. He reportedly dated a woman name Glenn Lovrich but not much is known about their alleged relationship. Their romance rumors began swirling in 2011 and the two were said to have attended a handful of Hollywood events together the year that they were “a couple.”

Reedus was first linked to Singley when they were spotted holding hands at the Z100 Jingle Ball red carpet, in 2013. The then 20-year-old was a model for Tom Ford. Their large age difference raised a few eyebrows among the TWD fan community.

The model-turned-actor met Diane Kruger when they starred in the 2015 flick, Sky. Dating rumors soon followed but their’s was a complicated beginning.

Kruger’s first marriage with French actor, Guillaume Canet ended in 2006. That same year, she began dating Joshua Jackson. After 10 years together, they ended their relationship in 2016. They had a few shared homes in different parts of the world, among which, their West Hollywood mansion recently sold for just under $5.8 million.

When the rumor mill was buzzing with Kruger and Reedus’ supposed romance back then, she was still with Jackson. A few months after they broke up, the actress was front and center at Reedus’ art exhibition in Paris, where some sources claim they spotted them kissing. Reedus moonlights as a painter, sculptor, and photographer and has displayed his artistic talents in galleries in Paris, New York, Berlin, and Frankfurt.

While they have not confirmed their relationship, the pair has been spotted several times since then, packing on the PDA. They even enjoyed some R&R together in Costa Rica! Even if they don’t spell it outright, it looks like they’re going strong.