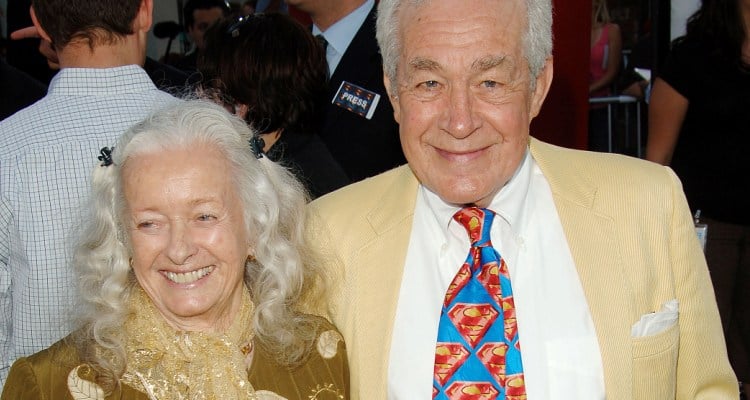 Actress Noel Darleen Neill regrettably passed away at age 95 on Sunday, July 3. There’s a good chance you were already aware, given the proliferation of headlines reading “Noel Neill Dead at 95” and searches like “Noel Neill death” and “Noel Neill Lois Lane.” Best known for playing the original Superman’s Lois Lane during the ‘40s and ‘50s, she was the female lead, love interest, and constant damsel in distress in the series. Her unfortunate passing has made her as prolific now as she was when playing the role with Noel Neill images and information now being in demand. With that in mind, here are four quick tidbits of information regarding the late Noel Neill.

Noel Neill was born November 25, 1920, in Minneapolis, Minnesota, to a vaudeville performer mother and journalist father. She started working towards her career very early, and at the age of four, she was entered into a school that taught her performing arts. As a teen, she toured the Midwest where she sang, danced, and played the banjo at county fairs as well as model. She was the second-most popular pin-up girl for U.S. soldiers during World War II.

Noel Neill and her biggest role as Lois Lane are practically synonymous with each other. Neill first took the role as the Daily Planet’s top journalist in 1948 after being scouted based on her recurring appearance as Betty Rogers in the “Teen Agers” musical comedy series. She appeared as Lois Lane in Superman (1948) and Atom Man vs. Superman (1950) before reprising the role in the Adventures of Superman TV show from season two to the final season, six. There was to be a seventh, but plans were cancelled after George Reeves, who played the Man of Steel, was found dead via an apparently self-inflicted gunshot wound.

Once her time as Lois Lane was over, Noel Neill retired but would continue to appear in Superman-related media, usually in roles of someone involved with or related to Lois Lane. In the 1978 film Superman, the first to star Christopher Reeve in the titular role, she become the first person not only to play Lois but also Ellen “Ella” Lane, Lois’s mother. This would be the beginning of a tradition of women who played Lois also playing Ella. Phyllis Coates, who played Lois on season one of Adventures of Superman played Ella on Lois & Clark: The New Adventures of Superman while that show’s Lois, Teri Hatcher, appeared as Ella on Smallville. The final and most recent appearance she made was in 2006 when she appeared in Superman Returns playing Gertrude Vanderworth, the elderly wife of Lex Luthor. Noel Neill, Superman Returns: it’s kind of fitting that she herself returned to the big screen for this one!

A quick glimpse of the Noel Neill IMDB page will show that she actually had a ton of roles outside of the plucky reporter who needed constant saving. In fact, outside of Superman content, she actually had appearances in nearly 100 films. She was especially notable for one genre in particular as she appeared in a large number of westerns over the course of her career. Because of her contributions to the genre, she was awarded the Golden Boot Award in 2004.