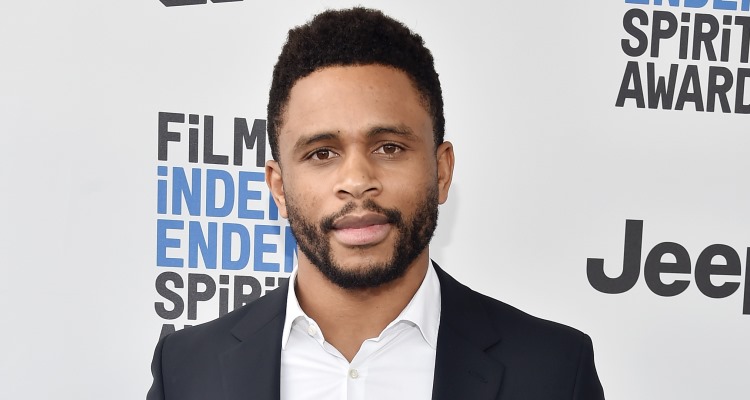 If there’s one power couple in Hollywood famous for keeping to themselves, it’s Nnamdi Asomugha and Kerry Washington. The Scandal star is famous for her role as Olivia Pope, the fictional Washington, D.C. fixer and former mistress to the president. Now, Washington is making headlines for Scandal‘s 100th episode, which means all eyes are on her husband, as well. So, if you want to know more about Kerry Washington’s husband, then get your answers from our Nnamdi Asomugha wiki, right here!

Nmamdi Asomugha, 36, was born on July 6, 1981 to Nigerian Igbo parents in Lafayette, Louisiana. He was raised in Los Angeles, California and transferred to several high schools while growing up. He played college football for the University of California Berkeley and was drafted in 2003 by the Oakland Raiders and is a former cornerback.

Asomugha’s net worth is estimated at $55.0 million, due to his career as a professional athlete.

From the 2003 to 2010 seasons, the former football star played for the Oakland Raiders. The following two seasons were spent playing for the Philadelphia Eagles after signing a five-year contract for $60.0 million, which included a $25.0 million guarantee. For a brief period in 2013, he was also signed to the San Francisco 49ers, for a one-year contract.

The 36-year-old has also acted in supporting roles by making appearances in The Game, Friday Night Lights, Fire with Fire, Double Negative and Kroll Show.

If you’re looking for details on Asomugha’s and Washington’s wedding, then you’re out of luck! The couple were secretly married and it wasn’t reported until a while later. Washington isn’t one to talk about her personal life, especially rumors, which she has been at the center of before.

She told Glamour magazine in 2013, “I have girlfriends in this business who talk about their personal lives, and it works for them, and I love it. But not for me. I learned through experience that it doesn’t work for me to talk about my personal life.”

She continued on to say, “I’ve had earlier times in my career when I did talk about it. I was on the cover of a bridal magazine [she covered InStyle Wedding in 2005 before ending her engagement to actor David Moscow in 2007]…But I couldn’t just turn around and say, ‘I only want to talk about the good stuff, but not the bad stuff.’ So I just thought, ‘OK, no more.'”

And just like that, Washington handles the media on anything that goes beyond work! How very ‘Olivia Pope’ of her!

The pair have two children together: Daughter Isabelle Amarachi (Igbo for “God’s grace”), born in April 2014 and son Caleb Kelechi, who was born in October 2016. The sixth season of Scandal actually had to be pushed by a few months to accommodate Washington’s pregnancy, since it hadn’t been written into the script. Those lovely overcoats she wears on the show certainly hid her baby bump well!

His Wife wasn’t Supposed to be on Scandal

With Scandal‘s milestone 100th episode airing this Thursday, the fans and cast are excited, but were caught off guard by one skeleton in show runner, Shonda Rhimes’ closet. In an interview with The Hollywood Reporter, Rhimes explains that the network originally thought Scandal was getting a white lead!

“Shonda said she felt strongly that Olivia be black. It was inspired by Judy, and she wanted to honor that,” Channing Dungey, then-ABC drama head, and now president of ABC Entertainment said in an interview with The Hollywood Reporter.

The original Olivia Pope was supposed to be played by Nashville star, Connie Britton, until Rhimes chimed in!

“Nothing felt more important than the sense of outsiderness. I didn’t know that there hadn’t been a drama series with a leading black woman for 37 years. When the show got picked up [to pilot], I got a phone call from somebody who said, ‘This would be the perfect show for Connie Britton,'” Rhimes explained. “I said, ‘It would be, except Olivia Pope is black.'”

Well, we certainly can’t imagine our favorite gladiator in a suit without Washington, her signature Prada bags, or her fast talking monologues!