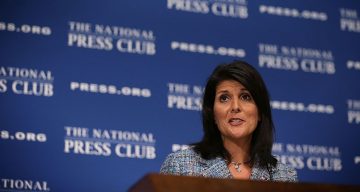 Nikki Haley is all set to meet Donald Trump on November 18. According to sources, Trump is considering her to fill in the position of Secretary of State. Who is Nikki Haley? Keep reading, because we have all the information for you right here.

South Carolina Governor Nikki Haley and Donald Trump go way back, but not in a good way. Haley never supported Donald Trump while he was running for president. During a conference, she even said that she thinks Trump is dangerous. Now that he has become the President, do we see a change of behavior and thoughts? According to many rumors, Nikki Haley is being considered to fill in the position of Secretary of State.

If you have no idea about who Nikki Haley is, then why not take some time and get to know the potential Secretary of State? Here is a list of facts from Nikki Haley’s wiki.

Haley is The First Female Governor of South Carolina

Born as Nimrata “Nikki” Randhawa on January 20, 1972, in Bamberg, South Carolina, Nikki Haley is of Sikh ethnicity. Her parents are Sikh immigrants from Punjab, India. Her father, Ajit Singh Randhawa, was a professor at Punjab Agricultural College in India. Haley’s parents moved to Canada after her father received a scholarship offer from the University of British Columbia. Later, the entire family moved to South Carolina, after Haley’s father became a professor at Voorhees College.

Haley graduated from Orangeburg Preparatory Schools and Clemson University. She has a degree in Bachelor of Science in accounting.

Although she was born in a Sikh family, Haley’s husband, Michael Haley is a Methodist Christian. They got married in September 1996, following both Sikh and Methodist customs. After her marriage to Haley, she converted to Christianity and now attends Mt. Horeb United Methodist Church.

Haley’s husband is an officer in the South Carolina Army National Guard. She admits that she had her fair share of ups and downs in her married life, when her husband was sent on a year-long deployment to Afghanistan in the year 2013. He served full time until 2015 and currently serves the National Guard part-time.

Nikki Haley’s Net Worth is $1.4 million

Nikki Haley’s net worth is calculated to be approximately $1.4 million.

In Forbes, she was listed as the World’s Most Powerful Women to Watch. Her wealth is all due to her stance in the political world. Before she became Governor, she represented Lexington County in the South Carolina House of Representatives for six years, from 2005 to 2011.

Apart from being Governor, she also serves as chair, ex-officio, of the board of trustees of the University of South Carolina during her term in office. Haley had endorsed Republican Marco Rubio for the United States Presidential elections in 2016.

Haley has supported various issues such as Economic policies, the removal of the Confederate flag, LGBT rights, and having tighter laws regarding illegal immigration. In 2016, Time magazine named her among the “The 100 Most Influential People.”