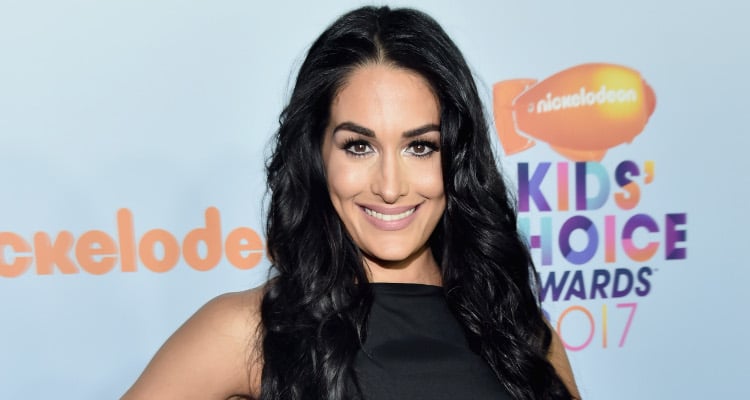 Dancing with the Stars contestants had a scary Halloween experience when there was a double elimination on Monday’s episode! The two contestants who packed their bags and went home were Vanessa Lachey and WWE star, Nikki Bella. It was definitely a disappointing Monday evening for Nikki Bella and her fans. We know a lot of you are upset about the fact that Bella was eliminated, but to cheer you up, we have come compiled a list of ten Nikki Bella hot pics from Nikki Bella’s Instagram account! Take a look at them below.

She was born Stephanie Nicole Garcia-Colace on November 21, 1983, which means her age is 33. She is an American professional wrestler, model, and actress signed to WWE. She adopted the ring name Nikki Bella and now she is famously known as such by her fans.

Bella started dating John Cena in 2012 and after dating for five years, the couple got engaged on April 2, 2017. Cena proposed to Bella at WrestleMania 33 during a tag team match. Cena asked Bella to marry him after the pair defeated The Miz and his wife, Maryse. For a very long time, Bella wanted Cena to propose to her, telling her friends, “You guys, John finally told me on our three-year anniversary that marriage doesn’t bother him anymore, he wants to marry me, he wants to be married to me!” She further added, “I want him next to me my whole life. I can’t live without him.”

Besides being known as a famous wrestler, Bella has appeared in movies and TV shows such as Confessions of a Womanizer, Clash Time (TV show), Total Divas (TV show), Psych, Unfiltered with Renee Young, Total Bellas. She was also a part of Dancing with the stars season 25. Bella was paired up against choreographer, Artem Chigvintsev. Unfortunately, the couple failed to impress the judges and the viewers with their dance routine, and were eliminated from the show on October 30, 2017.

Although Bella has been eliminated from the show, she is still a queen of her hearts and also of Instagram. Bella has almost 6.5 million followers on Instagram and she keeps posting pictures to update all her fans. If you have been dying to look at some of Nikki Bella’s bikini pictures, then without any further ado, let’s take a look at some of them. We’ve found some of her hottest shots for you to ogle over!

Good Morning! Nothing like sleeping in your Love's shirt & @birdiebeebrand's ?☕️ Can't wait for the November launch! Make sure to head to www.birdiebee.com! Also, make sure to root on my Love this Sunday at #nomercy ?? #cenation #birdiebee #mybirdiebee

NYC got a hold on me ? #jonathansimkhai #chanel #fluerdumal #muehlbauer #nyc #love

A few clouds won't keep me inside! Summer is only so much longer so I’m making the most of it with my absolute must haves — my @Dunkindonuts Cold Brew coffee (I drink mine black!) & a bikini [☕️] [?]! #SummerNotSorry #dunkindonuts #sponsored

More in the IG story ?