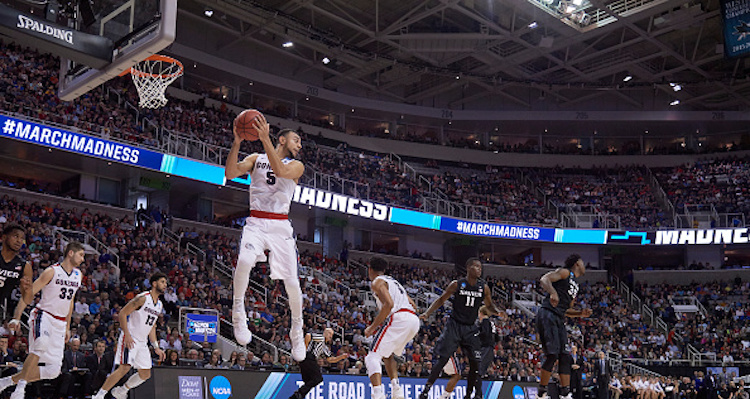 The Gonzaga Bulldogs’ leading scorer seemed to be slacking during the NCAA Tournament, but in Saturday’s game against the Xavier Musketeers, he scored 23 points in an 83-59 victory that took players and fans by surprise! Who is this potential NBA star, Nigel Williams-Goss? Everything you need to know about the basketball player (who is No. 5 on the Gonzaga roster) is right here in our Nigel Williams-Goss wiki!

Despite Nigel Williams-Goss’ great performance in last Saturday’s game, he believes he still has room to grow. “I missed some bunnies, some really easy shots, missed three free throws.” The baller said he still has not found his rhythm offensively, my whole focus was getting us to Phoenix (for the Final Hour.)”

At the age of 22, Williams-Goss is one of the finalists for the John R. Wooden Award, named college basketball’s player of the year. He was born September 16, 1994 and stands 6’3″. He attended Findlay Prep high school in Henderson, Nevada, and helped lead the team to achieve a 124-8 record, including the High School National Championship in 2010 and 2012. Despite his hard work on the court, he maintained his 4.0 GPA throughout high school. He continued to impress as a senior, winning the prestigious title of the 2013 McDonald’s All-American Game against the best high school seniors in the U.S.

After beginning his sophomore year at Findlay Prep, he committed to UNLV, despite being heavily pursued by the Rebels, Arizona, Washington, Oregon State, and Oregon. Georgetown and Connecticut were also very interested in him. Washington Head Coach Lorenzo Romar thought highly of the player saying, “He is a great floor general. He is very intelligent and has high, high basketball I.Q. He understands what it takes to win and is a great leader. Guys like him don’t come around very often.”

Williams-Goss played college basketball for the Washington Huskies (2013-2015) before joining Gonzaga in 2016. Since his basketball career began in 2013, he has already been piling up the awards and highlights. Two of his biggest moments happened this year as he was named the WCC Newcomer of the Year, and the WCC Player of the Year. He took to Instagram to share his excitement.

Sitting out last year and having to have surgery made for one of the toughest years of my life. To bounce back and accomplish something like this is nothing but a blessing and a testament that God always has a plan for us. Nothing is ever accomplished alone so I couldn’t post this without recognizing my teammates and coaches for all of their sacrifice and help! #EarnedNotGiven

Along with Lonzo Ball (UCLA), Josh Hart (Villanova), Frank Mason III (Kansas), and Caleb Swanigan (Purdue), he has been invited to Los Angeles’ College Basketball Awards for the trophy presentation on April 7. On Monday, the 10-member Wooden Award All American team was announced, and besides those five, Dillon Brooks (Oregon), Josh Jackson (Kansas), Justin Jackson (North Carolina), Luke Kennard (Duke), and Malik Monk (Kentucky) are on the team. Williams-Goss is set to play in the Final Four this weekend in Arizona with Books, and Justin Jackson. “Nigel is a proven high-level player who possesses all of the qualities that we admire here at Gonzaga,” said Gonzaga Head Coach, Mark Few about the athlete. “He’s also been great in the classroom as an Academic All-American, which fits in with our history of academic success. We are really excited to get him in here and help him develop the next part of his game.”

Although Nigel Williams-Goss’ net worth is unknown, it’s easy to see he has all the potential of being an athletic champion in the games ahead. Check out the chart below for stats of his current season averages!