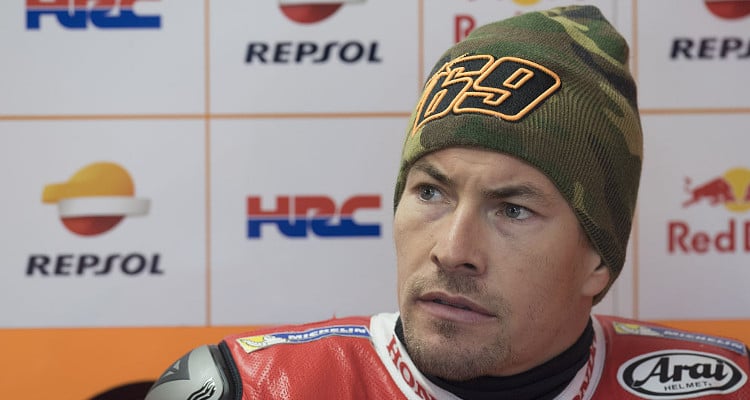 Nicky Hayden, a bike racer and former MotoGP champion, tragically passed away on May 22. How did Nicky Hayden die? We’ve got the details and the answers to several more questions surrounding his death.

The racing circuit is mourning the loss of “the nicest guy” on the track, Nicky Hayden. The former MotoGP champ passed away on Monday, May 22 under tragic circumstances. Tributes by his fellow riders, Formula 1 stars, and other big names in the sports world are pouring in. He will be remembered for his immense talent and passion for motorcycle racing. Here are more details about his life and cause of death in our Nicky Hayden wiki.

Hayden was born in Owensboro, Kentucky to Earl and Rose Hayden. According to his website, his parents were into dirt track racing. Hayden and his siblings —Tommy, Jenny, Nicky, Roger, and Kathleen— developed their passion for racing from their parents. “Nicky was riding by age three and racing two years after that, and the kids would turn endless laps around a humble short track on the family’s property, with Earl’s ever-present stopwatch tracking their progress.”

Earl Hayden ran a used car dealership, which was the family’s main source of income. He used to be a racer himself, and Nicky took on his racing number, 69. Earl would joke, “I crashed a lot, so I needed a number that you could read when I was upside-down.” They ensured their kids’ education wasn’t compromised and they graduated while traveling the country for amateur races.

Also Read: Angela Magana Wiki: Everything to Know About Angel ‘Your Majesty’ Magana

The Hayden family lives and breathes bike racing, which is why they’re dubbed the ‘Dirt Track Family’ in racing circles. Nicky Hayden began competing at a young age, often at the back of the grid because a family member had to hold his bike upright so his feet could touch the ground. He was winning superbike championships in high school and turned pro on his 16th birthday. He followed his brother Tommy into AMA Racing, and began racing for Honda.

In 1999, Hayden won his first Grand National Championship race (Hagerstown Half Mile) and was the  Rookie of the Year. His youngest brother, Roger, also followed in his tracks. The Hayden sisters, Jenny and Kathleen, were also racers but gave up dirt track when they were younger. Nicky Hayden’s bio states they decided to switch to more traditional sports.

Hayden won the Daytona 200 in 2002 and became the youngest AMA Superbike champion ever. He was promoted to the MotoGP championship with the Repsol Honda factory team. He earned a couple of podium finishes in his rookie years. His first win was in 2005 at his home race, the Laguna Seca round. The following year, he fulfilled his lifelong dream: Winning the MotoGP world crown after a season-long battle with Valentino Rossi.

He signed with the Ducati racing team and renewed their partnership through the 2012 season when Hayden was in the racing circuit for a decade. He returned to Honda in 2014 and, the following year, he made his return to the Superbike World Championship. After strong pre-season finishes, Hayden won his first World Superbike race, taking Honda’s first win of the 2016 season. The racing veteran has earned a net worth of $18.0 million in his career.

Also Read: McKayla Maroney’s Hot Instagram Pics: Another Side to the American Gymnast

Engaged to a Reality Star

The 35-year-old MotoGP legend became engaged to his longtime girlfriend, Jackie Marin, in May 2016. If the name sounds familiar, it’s because she was one of the stars of the TV Guide network’s short-lived reality series, Tequila Sisters. The show followed the lives of Jackie and her sisters —Jen, Lauren, and Catherine— as the children of traditional Mexican parents.

Marin loves boxing and is an avid fan of Hispanic boxers. She’s also passionate about music and recorded a song with her sister on the show. The reality show depicted the Marin sisters’ Hollywood aspirations, but Jackie curtailed her showbiz career to devote more time to her fiancé and support him during his races. Hayden proposed to Marin a year ago in Italy. The couple didn’t have any kids, though Hayden has adorable nieces and nephews.

Nicky Hayden’s Cause of Death

On May 17, Hayden was riding a bicycle near Rimini, Italy, when he was hit by a car. The driver stated that he was on his way to work when Hayden passed a stop sign and suddenly appeared in front of him. He was unable to stop the collision, and security cameras recording showed Hayden apparently being distracted by his iPod. He slammed into the car’s windshield and was taken to Rimini hospital with severe injuries.

Reports disclosed that he was being treated in the intensive care unit for head and chest injuries. Hayden was in Italy for training, and his family had flown out from the U.S. to be with him. Ultimately, he succumbed to his injuries. Hospital authorities stated that he died of severe cerebral damage and multiple traumatic injuries.

Tommy Hayden released the statement following his brother’s death saying, “On behalf of the whole Hayden family and Nicky’s fiancée Jackie I would like to thank everyone for their messages of support – it has been a great comfort to us all knowing that Nicky has touched so many people’s lives in such a positive way,” he said. “Although this is obviously a sad time, we would like everyone to remember Nicky at his happiest – riding a motorcycle. He dreamed as a kid of being a pro rider and not only achieved that but also managed to reach the pinnacle of his chosen sport in becoming World Champion. We are all so proud of that.”

Nicky Hayden’s racing friends, who had been praying for his recovery, were devastated by the news of his death. Tributes continue to pour in from fans and the racing world.