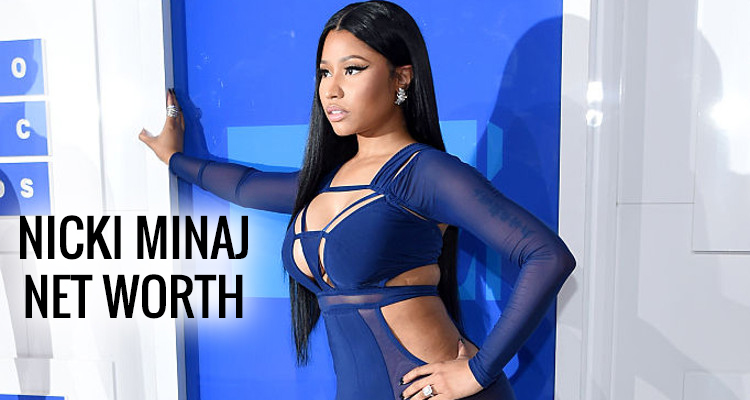 Nicki Minaj is one of the few successful female rappers in the industry. She’s the reigning Queen of Rap and has earned both fame and money in her career. Minaj turns 34 today (December 8), so we’re going to celebrate it with all things Minaj.

Nicki Minaj went from a failed waitress to the reigning Queen of Rap. There’s no stopping this hip-hop superstar who can give every swagtastic male rapper a run for his money. Speaking of money, Minaj has a lot of it —and her wealth and fame continue to grow. Adding to her multiple business ventures, Minaj has a launched a new mobile game Nicki Minaj: The Empire and a song to go with it. With so many projects under her belt, we couldn’t resist finding out how much is Nicki Minaj worth. Find out how she earns her money right here.

In 2014, Minaj was ranked #11 on Forbes’ Hip-Hop Cash Kings List with an estimated net worth of $14.0 million that year. She is the first and only female to ever make it on that list. That’s a big honor and making it even better is that Minaj’s net worth has increased five times since then. As of 2016, the 34-year-old’s net worth is a whopping $78.0 million.

Minaj is still a little short to make it on Forbes’ highest-earning female artists, but we’re sure she’ll make it on there soon. She’s got numerous endorsement deals, businesses, and chart-toppers to her credit after all.

Minaj and Her Boyfriend Live in an Expensive Mansion

Many kept speculating that Minaj is in a relationship with hip-hop artist Meek Mill. The couple officially confirmed their relationship in 2015. Their relationship grew and in August this year, they moved into a sprawling 11,500 sq.ft. mansion in Beverly Hills. They pay an unbelievable rent of $30,000 a month for the mansion.

Wonder why Minaj rented a mansion when she owned several properties, including a mansion in Malibu worth $11.8 million? Meek Mills has had a spate of legal issues, including getting arrested for possession of a firearm, assaulting a police officer, and dealing drugs. Mills has also notoriously violated his probation and has come under fire for doing so.

Given his legal troubles and his limited success as an artist, Mills had to put off his plans to buy a permanent residence in Los Angeles. Minaj also wanted them to take things slow and decided to rent a residence together instead of buying one.

The Pink Maven Drives in Pink

A hip-hop artist isn’t complete with a stylish set of wheels. But with all the male rappers and their expensive rides out there, how does the Queen of Rap stand out? By driving in pink, of course.

Minaj is the proud owner of two Lamborghinis. A red Lamborghini Gallardo worth $200,000 and a hot pink Lamborghini Aventador priced at $393,695. She also drives around in a Bentley Continental GT which is worth $200,000, and of course, is bright pink.

She Has Successful Businesses

Minaj helped launch the Casio TRYX and the Nokia Lumia 900 in Times Square. Mattel even created a custom-made, Minaj-themed Barbie doll to be auctioned for $15,000 on charitybuzz.

Minaj participated in the Viva Glam campaign twice to raise funds for the Mac AIDS fund. The first time, she raised $270.0 million. In the second campaign, Minaj introduced her “Nicki 2” lipstick and lip gloss, and a collection of clothing, accessories and homewares with K-Mart.

Minaj partnered with Beats Electronics to launch her own brand of speakers called Pink Pill in 2013. Minaj is part owner of Myx Fusions, a fruit-infused, single serve moscato wine beverage, and even did an ad campaign for it. She launched her own fragrance line, Pink Friday in 2012 and followed ot up with a special and deluxe edition of the same fragrance in 2013. She also launched other fragrances, Minajesty, Minajesty: Exotic Edition, Onika (her birth name), and Trini Girl.

Minaj was also the face of Roberto Cavalli’s 2015 spring/summer campaign. She also joined the Tidal bandwagon like many celebrities by becoming co-owner of the music streaming service.

The Queen of Rap has stepped into the tech business by launching her own mobile game called Nicki Minaj: The Empire. The game is about building your empire as an artist. You have to launch your virtual career, record your own voice, and build your reputation as a performer. Minaj will herself be listening to some of the singers through the app. So aspiring musicians can turn their virtual career into a real one if they’re lucky. Minaj has also launched a bouncy new single “Ain’t Gone Do It” to go along with the app. So what are you waiting for? Download Nicki Minaj: The Empire now.