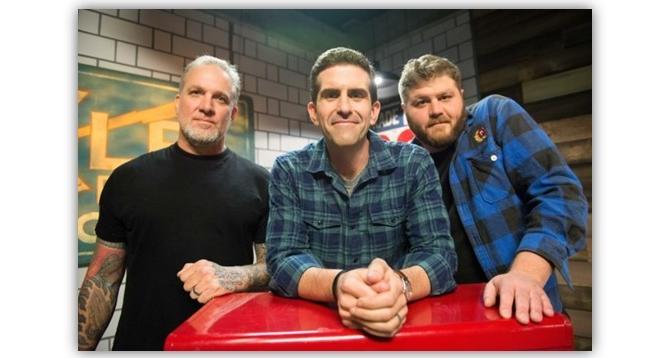 Comedian and actor, Nick Stevens has a lot on his plate right now, and he’s about to add being the host of Discovery Channel’s new show, Brake Room. Stevens already has a reputation for being a funny guy, but we have a feeling that we are going to be seeing a lot more of him with the launch of his new show. If you want to know more about the man who rips apart everyone he can, then take a look at our Nick Stevens’ wiki!

Who Is Nick Stevens?

He was born Nicholas G. Stevens in 1974, which means he is currently around 43 years old. Stevens hails from Braintree, Massachusetts and graduated from Braintree High School in 1992.

Acting and comedy were his passions at a very young age. He enrolled at New York University to study film and television production and graduated in 1996 with a Bachelor of Fine Arts.

Stevens had a four-month stint as the host of ESPN.com’s Monday Night Mania, covering parties, tailgates, and more. His hilarious antics and comical live interviews are what first got him noticed.

In September 2008, Stevens was the cohost for The Flex Position at ESPN Radio. Each week, they covered all the latest news, fantasy football ratings, analyses, and sits.

He then hosted the NESN show, Pocket Money, in 2009. It was a fan-on-the-street sports trivia game show.

Although he hosted many shows and events, he first appeared to gain some real notoriety as a comedian in Canada on VH1. His career as a comedian started back in 2004, when he was a talking head and comedian on VH1 for over eight years.

Stevens has also worked as a freelance writer and performer at Friars Club for almost a year. During his time there, he performed at several celebrity roasts, including Padma Lakshmi and Dennis Rodman.

Now, Stevens works as a comedian in clubs, theaters, and bars. He performs sketch, stand-up, character, and improv comedy all over New York City and in different parts of the United States.

He was the cocreator, cohost, and producer of The Shark Show.

It looks like Stevens likes to keep himself busy. And boy does it seem like he has a lot on his plate!

For the last five months, Stevens has been the cohost of another podcast called Shawshanked, where the team talks about various pop culture topics, Top 10’s, and other topics.

Additionally, Stevens also has his own blog, where he likes to write and stay connected to his fans.

Since 2005, Stevens has been with Don Buchwald & Associates and Innovative Artists in New York as a “smartass-for-hire” to host radio, TV, and web shows, as well as for voiceover work and stand-up acts.

Also Read: David Spade’s Net Worth In 2018: How Rich Is the Comedian and Actor?

Stevens will be adding more credits to his long list of on-air work! He is happy to be hosting Discovery Channel’s newest show, Brake Room, which will premiere on October 1, 2018 at 11:00 p.m.

Brake Room is a game show for gearheads. It will feature celebrity contestants trying to predict what happens in the craziest viral videos from the motor world.

Nick Stevens is happily married to Emily Rabon Hall. The couple got married on June 4, 2006.

Hall is from Westport, Connecticut and studied voice performance and opera at the Boston Conservatory at Berklee College of Music. She is a Broadway performer, music educator, and a songwriter.

And she is no less hardworking when it comes to her own career! Hall records and performs children’s songs. She also has a YouTube channel called Music With Emily, where she posts videos.

His Mother Was Involved in the Local Theater Scene

Stevens’ mother, Tommie J. Stevens, passed away at the age of 70 on April 2, 2013. She lived in Braintree since 1970 and was an actress for several years. She was also the director for Darling Productions and the Curtain Call Theater in Braintree.

He also has a brother named Geoffrey Stevens. He lives in Brooklyn, New York and studied psychology at Harvard University. He currently works as a freelance video producer at CBS Local Sports and freelance video editor at Condé Nast.

Nick Stevens’ comes from a family that was involved in the entertainment industry in one way or another. So, it’s no surprise that he followed in their footsteps.