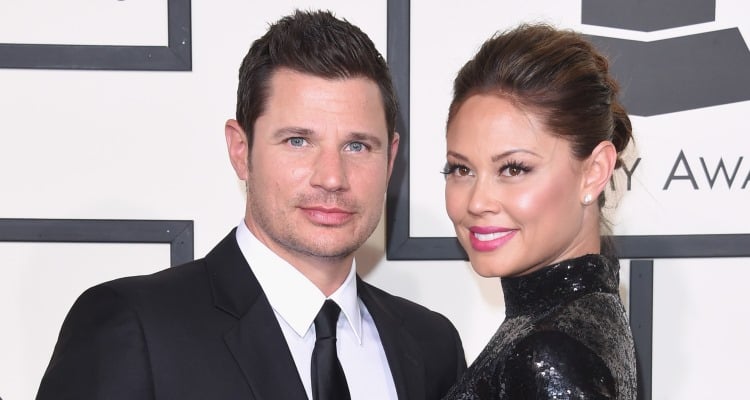 Who is Nick Lachey married to? If you guessed Jessica Simpson, then you seriously need to keep up with your entertainment news! Nick Lachey’s wife is actress Vanessa Lachey, 36, and after her latest post on Instagram, everyone is brushing up on their Nick and Vanessa Lachey history!

She was Born in the Philippines

Vanessa Lachey was born Vanessa Joy Minnillo on November 9, 1980 in Angeles, Philippines. Her father, Vincent Minnillo, is an American citizen from Ohio, Cleveland of Italian and Irish descent and her mother, Helen Bercero, is from Manila, Philippines. She moved around a lot due to her father’s service in the air Force and her parents are divorced.

Does anyone remember that time when Nick was married to the first Mrs. Lachey, Jessica Simpson? It feels like it was so long ago—and it kind of was! The exes were married from 2002 to 2006 and they seemed happy enough. From reality shows to music video cameos, the two singers were one of Hollywood’s hottest and happiest couples and joint fans were sad when they divorced.

Her Wedding to Nick was a Surprise for their Guests!

Now, Nick, 43, is happier than he’s ever been and it’s all thanks to his second marriage with his wife of six years, Vanessa Lachey. Nick and Vanessa got married in 2011 on a tropical island with just 35 of their closest friends and family present. Close to the big day, none of the guests knew where they were going and they were only given a plane ticket to their destination!

“Our wedding invitations were in the form of a plane ticket. We told them they were going away and the attire was island chic. It was all very vague, said Nick to People.”

Communication is the Key to their Relationship

There’s a reason their marriage works and it’s all because of communication. Marriage in Hollywood lasts as long as the time remaining on a parking meter, but there are plenty of couples who have made it work. Nick attributes communication to the reason that he and Vanessa have stayed together all this time.

“It’s kind of cliché but communication is the biggest thing in a relationship,” the multi-talented 98 Degrees member told People. “You have to talk, you have to express yourselves. You don’t want to look back and resent not being heard.”

She Chose Motherhood Over Her Career

Vanessa has been a model, an Entertainment Tonight correspondent, a host for Total Request Live and she’s even starred in sitcoms such as Dads and People Are Talking. But she put her career on hold to continue giving her family what they need, and by the looks of Vanessa Lachey’s Instagram, she has no regrets!

On February 24, proud parents Nick and Vanessa celebrated their youngest child, Phoenix Robert Lachey’s two-month landmark. He’s the youngest out of three children, shared by Nick and Vanessa as they also have a son named Camden John, 4, and daughter named Brooklyn Elisabeth, 2. Nick took to his Instagram to post a picture of Phoenix wearing a striped onesie, while sleeping on a blanket with a winged pattern captioned, “2 months and counting…… #phoenixrobertlachey,” while Vanessa wrote plainly, “My Phoenix,” between two heart emojis.

How did the happy couple spend their Valentine’s Day? By telling the world how much they love their family, of course! Vanessa spent her Valentine’s Day by posting a quick video of her baby boy, Phoenix. The video was captioned “My Funny Valentine,” Vanessa wrote as her baby boy slept on mom’s lap. She hashtagged the photo, “#PhoenixRobert”

As you can tell by all the pics they take, there’s a lot of love in the Lachey household and it’s not just on Valentine’s Day!

Vanessa and Nick Lachey’s Net Worth

Vanessa’s net worth is reportedly $8.0 million, while Nick’s own is reportedly $20.0 million. Nick may have the jump on his wife now, but you never know, she may land that life-changing role before you know it!