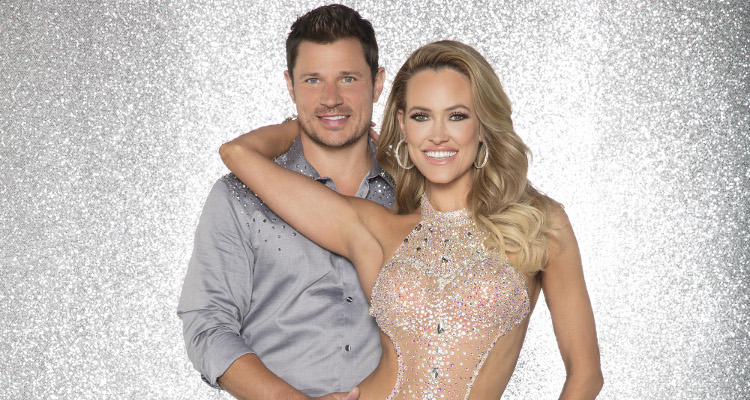 Singer-songwriter Nick Lachey is on Dancing with the Stars this season, and is paired up with sensational professional dancer, Peta Murgatroyd. Lachey was definitely more than happy when he was first introduced to his partner and can’t wait to strut his stuff on the ballroom floor.

The Dancing with the Stars cast members instantly hit it off and could barely hold in their laughter during their interview together. In fact, Murgatroyd even attended Lachey’s son’s birthday party with her baby boy.

Season 25 of Dancing with the Stars will be fun to watch as the singer and his partner will face off against Lachey’s wife, Vanessa Lachey, and Murgatroyd’s husband, Maksim Chmerkovskiy. So, it looks like it will be a battle of the spouses this season!

In an interview, Vanessa Lachey explained, “The goal we’ve decided as a family unit, a fam bam, [is] let’s get to the finals together.” She continued, “ The gloves come off, I guess. We just don’t want it to be awkward, like, week three that I’m sitting in the audience watching him and Peta dance or vice versa.” Her husband added, “If we’re sitting in the audience week three, I’m going to be embarrassed to show up to the ballroom.”

Dancing with the Stars will premiere tonight (September 18, 2017), and it already looks like Lachey has worked extremely hard to get his steps right. If you are a fan of Nick Lachey and Peta Murgatroyd and want to learn more about them, keep reading!

Nick Lachey is a Singer, Actor, and Songwriter

Of all the pictures I've taken in my life, I'm MOST proud of this one! Honored to be a part of @People Magazine's World's #MostBeautiful. #family

Nick Lachey was a member of the hit boy band known as 98 Degrees, who dominated air waves in the ’90s. He rose to prominence on TV by starring in the reality show, Newlyweds: Nick and Jessica with his then-wife, Jessica Simpson.

Besides singing as a group, Lachey released several solo albums like SoulO, What’s Left of Me, A Father’s Lullaby, and Soundtrack of My Life. He also appeared in several TV shows like Charmed, Overhaulin’, One Tree Hill, Taking the Stage, The Sing-Off, The Winner Is, and Lachey’s: Raising the Bar.

Lachey married fashion model and television host, Vanessa Minnillo on July 15, 2011. The couple have three children together: two sons and one daughter.

Peta Murgatroyd is a Professional Dancer on Dancing with the Stars

07~08~2017 was the most ✨magical✨day of my life. I married my soul mate, my perfect man, the only man I could see myself growing old with. I will love you until the end @maksimc ? #mrschmerkovskiy #myhusband ? @jamielevinephotography

Professional Latin dancer Peta Murgatroyd is competing once again on Dancing with the Stars for season 25. She has been a professional dancer on the series for almost 12 seasons.

At the age of four, Murgatroyd began dancing ballet. However, due to an ankle injury she sustained when she was 16, she had to give it up, and decided to learn Latin dance instead.

Murgatroyd walked down the aisle with her fellow Dancing with the Stars pro, Maksim Chmerkovskiy on July 8, 2017. The couple have a son named Shai Aleksander, who was born on January 4, 2017.

Dancing with the Stars will be off to a good start tonight, especially with all the new faces! Do you think Lachey and Murgatroyd will take home the Mirrorball Trophy at the end of season 25? Let us know your thoughts in the comments section below!

Catch the Dancing with the Stars season 25 premiere tonight at 8:00 p.m. EST on ABC. Watch the pair’s laughter-filled first interview below: