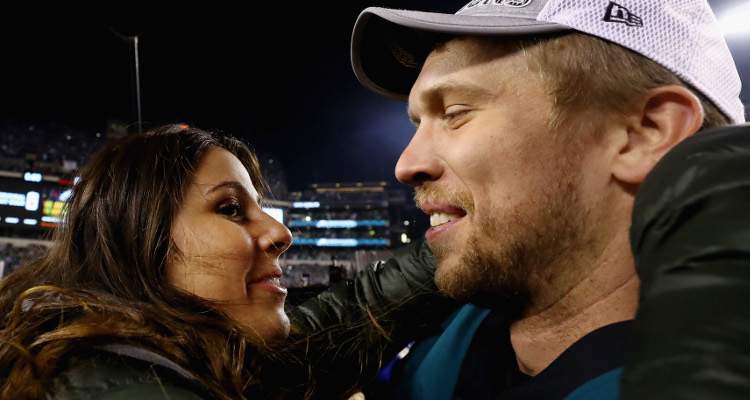 Nick Foles, a quarterback, had his first game as a starter for Indianapolis Colts recently. Foles signed a two-year contract with the Indianapolis Colts in May 2022. The former Eagles quarterback played in the NFL for ten years, and his tenure with the team was genuinely exceptional. He was awarded the Eagles’ first-ever Super Bowl MVP after guiding them to their historic victory in 2018. Nick Foles’ wife, Tori Moore, has been by his side throughout his career. Fans want to know more about Tori; therefore, we reveal her full background in this Tori Moore wiki.

Tori Moore was born on June 6, 1990, to Rosina and Daniel Moore in Brea, California. She was raised alongside two older brothers, Ryan Moore and Evan Moore. Her brother, Ryan, played collegiate basketball at UC Davis. But it is her other brother, Evan, who was her connection to football before Nick.

Evan Moore is a former tight end who played in the NFL from 2008 to 2012. After graduating from Stanford, he signed with the Green Bay Packers. He ended his career with the Philadelphia Eagles, where he was Foles’ teammate for a brief time.

Tori Moore went to Breaolinda High School, where she was a four-year letter winner and captain of her volleyball team. She graduated with a business degree from the University of Arizona in 2012.

Tori has worked for Nike Inc. while maintaining an active lifestyle. But 2013 took a turn for Moore’s health, as she detailed in a blog post.

Moore was diagnosed with postural orthostatic tachycardia syndrome (POTS), which led to an underlying diagnosis of Lyme disease. But she has taken her illness positively and hopes to encourage other women who are fighting their own health issues. That is why she started writing a blog, “Healing as We Go”; however, the blog is currently inactive.

“For me, this illness has been a journey of faith, hope, and trust in the process that God has set out for me,” she wrote. “Through my writing and my blog, I hope to be able to give some perspective on how to view difficult situations and help inspire people to find purpose in what they are going through.”

Tori and her husband are also dedicated to the Foles Believe Foundation. Together, the pair has established this organization to aid individuals in need.

They started as friends and dated later before Foles popped the question in 2014. The couple married on April 26, 2014.

In June 2017, she gave birth to their first child, a girl named Lily James Foles, while their second child Duke Nathan Foles was born on June 12, 2020. Before Duke, Nick Foles’ wife had suffered a miscarriage in May 2020 while Foles was playing for the Jacksonville Jaguars. He was absent from the team’s activities for a brief period after that.