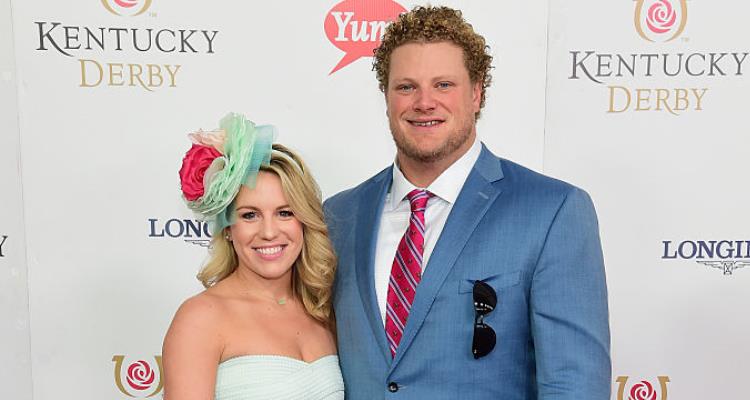 Eric Wood’s wife, Leslie, recently gave birth to their second child, a beautiful baby boy named Garrett and the timing couldn’t have been more perfect! While Wood was finishing off his ninth season playing for the Buffalo Bills, Leslie was in Louisville gearing up to give birth to their first son. Faced with the difficult decision of being present for the birth of his son and not letting his team down during one of the most important moments of the football season, Eric Wood suffered a career-ending neck injury. As it turned out, fate ended up making the decision for him. Check out our Leslie Wood wiki to learn all about the woman behind the pro-footballer.

Who Is Leslie Wood?

On January 7, 2018, Leslie Wood, Eric Wood’s wife, gave birth to a healthy and vibrant baby boy named Garrett Wood. While there aren’t any Leslie Wood wikis available on the Internet, Buffalo Bills fans are always anxious to find out as much as they can about the personal lives of their favorite players and their wives.

In past interviews, Leslie has admitted that she’s not necessarily as active as her famous husband, but that’s never been a point of contention in their relationship. The couple met while they were both attending the University of Louisville and Eric was on his college football team. In 2009, he was drafted in the first round of the 2009 NFL Draft by the Buffalo Bills.

From that point forward, their lives were forever changed. Just watch Leslie Wood’s segment on The Better Half of The Bills web series, where she talks about how the two lovebirds met and just how much their lives changed after Eric was drafted in the NFL.

Ironically, Leslie mentioned how awesome it was that she got to travel extensively with the team before her and Eric started having kids—and now they have two!

She said in an interview, “I wanted to do it this year because, you know, once kids come along, it seems to be a little more difficult to travel, so we’re having fun.”

As far as we know, Leslie Wood’s Instagram doesn’t exist, but we’re hoping that she and Eric will be posting or releasing pictures of their new little bundle of joy soon! And hopefully, now that Eric is retiring from football, the couple will be able to devote more time to traveling with their family!

Following a devastating defeat against the Jacksonville Jaguars during the wild card game that took place on January 7th of this year, Eric Wood enthusiastically expressed his excitement for the upcoming season.

“Obviously, [the game] didn’t turn out the way we wanted, but there’s a lot to build on and I’m excited for 2018,” the nine-year Buffalo Bills veteran and center player stated after cleaning out his locker.

Unfortunately, at that moment, Eric Wood didn’t realize just how much those words would come back to haunt him in the future. A mere couple of hours later, Wood underwent his annual end-of-season physical, only to discover that his football playing days were decidedly over.

As it turns out, Eric Wood had sustained a long-running ticking time-bomb injury to his neck, that would unexpectedly bring his football career to a crashing halt. Fortunately, it turned out to be a blessing in disguise because it meant that he’d be able to return to his pregnant wife in Louisville that very evening, just in time to witness her giving birth to their first son, Garrett Wood!

It’s been a few weeks since the couple welcomed the newest addition into their family and it seems as if baby and mother are both happy and healthy. There’s no telling how much they intend to extend their little family, but one thing’s for sure: at Leslie Wood’s age, it’s a great time to consider having more kids in the next few years! Especially now that her hubby will be around to experience it all!